A conversation with Gene Fowler: What’s the opposite of outsourcing? 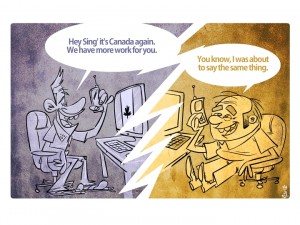 I got word the other day that Gene Fowler and his gang at Loogaroo had just picked up a gig from a company out of Singapore.  Never one to miss an opportunity, I hit him up on MSN to find out more about it.  Gene was good enough to indulge my questions and even drew up a littel illustration to accompany our chat.

MV: hey stank
GF: ahoy fellah
MV: so what’s the story on this Singapore thingy?
GF: Yeah, it’s interesting.  A few years ago while I had that studio in Halifax, I hired a flash programmer. It must have been 2001 or so.  He moved to Singapore and got work in E-Learning.  They were producing E-Learning courses for school kids. The first one they did they used a local studio. But didn’t get the results they wanted. A lot of stick figures were used in the designs and the animation when there was some was shoddy at best.  So he thought of me, gave me a call in the fall of last year and we just started catching up and talking about possibilities of using Loogaroo this time around.
MV: nice
GF: The job is certainly not a big one.  But it’s a few minutes of animation and it pays ok. Certainly not 2007 prices. But in this climate it’s not a bad deal. Plus it’ll keep a handful of us busy till April.
MV: It’s interesting to see this happen.  We complain about the work going over there, because it’s cheaper
GF:  Yeah for sure, but sometimes it comes back too!  Although this is the first I’ve ever heard of it coming to Canada.
MV: Me too.  Cheaper is not always better, so for once, the client wants better!
GF: They wanted quality. Yup.  It’s refreshing
MV:  And the fact that we WILL work cheaper than we used to, makes it doable.  The end result of globalization, and evening of the playing field, where work is awarded on merit.
GF:  It’s true, I’m not looking to make huge margins on studio work, I just want to keep myself and Loogaroo artists working.
MV: The new, “lean and mean” model
GF:  They’re great clients too, real easy to work with. With everything I show them they simple nod and say “You’re the experts”.
MV:  Wow, perfect.  What’s the job itself like?
GF:  It’s animation for an e-learning course featuring characters to help keep kids engaged. So we’ve developed a story in a school setting. There’s an intro to establish the learning objective, then it animated examples and games for the kids to watch and play to absorb the content. Then at the end, if they’ve proven that they understand the subject matter they get rewarded with some more animation to conclude the story. It’s fun.
GF:  I asked if I could take a Jay Ward visual approach to it.  They agreed, which is fabulous.  It’s totally my personal style, so I get to draw again. Which I’m so excited about.
MV:  So, the payoff for you is some creative freedom
GF:  Totally.  I’m even drawing on paper, fancy that.
MV: hey, me too!  Analogue all the way.   It’s the new digital
GF:  It is rewarding.  Digital makes you lazy .  Although my pinky and middle finger on my left hand is still searching for the Ctrl+Z when I fuck up with pencil in hand. Silly muscle memory.
MV: So, let me ask you, and this may be more info than you want to share, are your clients paying more to you than they would to a studio over there?
GF: That’s a good question, I don’t know the answer to that, although it’s a possibility. The gig is only worth around $25k. But for us right now, to keep a few of us busy for the next couple of months. It’s solid.
MV: Right.  I’m just curious regarding the thinking at the other end.  This is an interesting turn on the outsourcing issue.
GF:  It is.
MV:  We went to them for lower cost, and now, them coming to us for better quality
GF:  But remember these guys aren’t in our industry.  They’re in corporate. Corporate clients would know that Canadian Labour would be more expensive. However they know the quality would be better, especially because they have a Canadian ex-fatkat employee amongst their ranks to vouch for us… it by all means could be an isolated incident, but I hope not. 🙂
MV: Ah, so, as business men, they’re saying that putting money into better quality animation makes good business sense! It is kind of ironic, that they’ll pay for something that our industry often won’t.
GF: If it’s engaging the children, it makes good business sense.  And any common eye could see the difference in quality between the last course and the designs for the one that Loogaroo is producing for them.
MV:  So it’s money well spent
GF:  I hope so.
MV: Let’s hope it leads to more, and maybe the beginning of a trend.
GF:  I hope even more so for that one.