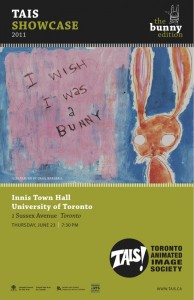 Congratulations to everyone who participated in the TAIS Showcase 2011 and BunnyJam!

What’s a TAIS you ask? ( I assume..i can’t actually read your mind)

TAIS ( Toronto Animated Image Society ) was founded in 1984 originally as a small group of animators getting together in their living rooms to encourage each other in making films. Since then it has grown into a not for profit organization which supports animators as artists and features screenings, lectures and workshops in Toronto throughout the year.

Every year animators are invited to submit their work for the TAIS Showcase. A group of 6 or 7 volunteers screen all the submissions and then arm wrestle, debate, and talk loudly with sweeping hand gestures to whittle down the entries into the final Showcase. It’s not easy. There’s a lot of great stuff and a limited amount of time to fit them in. There’s always films we wish we could have screened but just didn’t’ have enough time and we do our best to have a range of selections from local and abroad, in all manners of animation genres and techniques. I was not on the selection committee this year but it’s a grueling process of blood and tears (of joy) tempered only by pizza and snacks. An independent jury is then selected from out in the animation wilderness. Usually a couple people in different animation disciplines, who then screen all the films in the TAIS Showcase as well as the Anijams. There is  an audience award for both the best showcase film and Anijam as well, which the audience votes on (obviously), and the winners are awarded at the party immediately following the screening.

Anijams? Yes each year we have an open call for  animations, 10 sec long, no more, no less, in any style or technique featuring that year’s theme. They are then strung together into a mega animation of sorts and screened at the beginning of the Showcase. Previous years the themes have ranged from Monsters to Chickens to the Aquajam… this year’s theme: Bunnies. Thus the BunnyJam.

Aaron Long who won the Audience Award for his film “Fester Goes Fishing” and an honourable mention from the Jury.

Bryce Hallett and Emma Lander who won the BunnyJam Jury Award, (and an unexpected pleasant surprise for me.)

and Nick Cross who won the BunnyJam Audience Award.

TAIS would like to apologize to Americo Gomes and Raphael Rosenwald whose BunnyJams were viewed by the Jury and selected for the screening but due to unforeseen technicalities were unfortunately not screened at the event. Our sincere apologies for that oversight but we’ll be sure they are included with the others in the compilation for the TAIS YouTube channel.

Also a special thank you to our Jury, Milada Kovacova and Willy Ashworth for their work and tough decision making.

There were a lot of very good films this year.

Thanks to everyone who came out to the TAIS SHOWCASE

It was a great crowd and a lot of really great films were seen.

Hope to see even more next year!

Here are some photos from this year’s event: 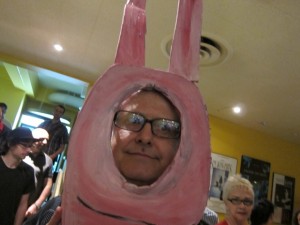 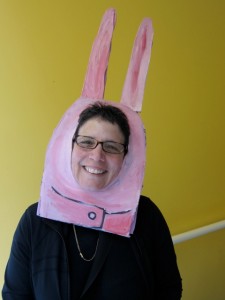 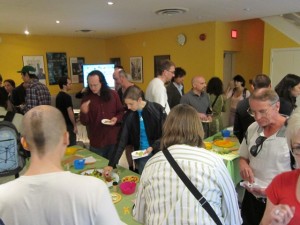 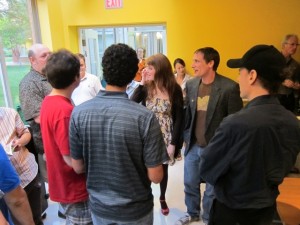 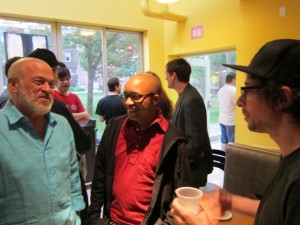 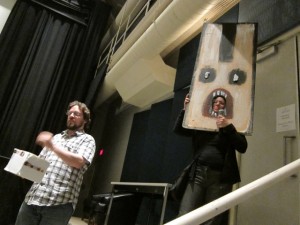 And here’s the Jam itself!