Death By Lemonade needs your vote! 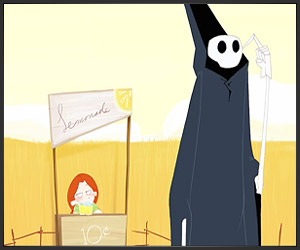 iThentic.com is an online broadcast portal that  runs a monthly video contest.  This month they’re doing animated videos, and one of the contestants is our fellow Canadian, Kyu-bum Lee.  We ran “Death By Lemonade” in our showcase a while back, and this would be a nice excuse for readers to go have another peek at the film.  I’m not saying you have to vote for it, but if it were your favourite of the three films, you guys could show your support for one of our own by casting a vote in its favour.