Well, as reported here last night, Fatkat Animation, of Miramichi, NB, is closed.
Word went up on the studio blog today from Gene Fowler. Here’s some of what he had to say: 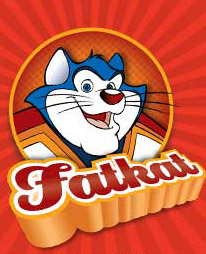 Alot of stuff has happened in the 10 years that the Fatkat brand has been kicking around, though mostly all in the last half. We’ve produced simply a ton of commercials and interactive spots. We’ve cranked out series such as Skunk Fu!, Chaotic, SuperNormal and of course the straw that broke the camel’s back “Three Delivery”. Don’t get me wrong, all were good productions, but Three Delivery was the monster, some called it a studio killer (you were right Rick!), I just giggled it off, but I knew they were right. It’d be a miracle if we came out of that one alive. Though it certainly beat the hell out of us all, we made it though. With all 26 episodes delivered to YTV and the other broadcasters just last week. I thank the entire TD crew for that, you did what many could not, you survived the most demanding and torturous production I have ever seen and did it with a smile, albeit a few teeth are missing from your smile; my heart goes out and my hat comes off to you. I’m very proud of the work Fatkat produced and Three Delivery is an awesome show because of it. Extra big thank yoos to Robbie Anderson & Tavis Silbernagel for making it shine and staying committed through all of it. A massive thank you to Stephen Ashe and Carol MacKinley to cleaning it all up in finance, insuring that everyone was paid in full. It was no small task and you did it all with grace and humility. I thank you.

Gene gives personal thank yous to a huge list of people then looks to the future:
I have gathered a few close friends from Fatkat and will be starting a new studio here on the Miramichi. It will be called “Loogaroo” . We’ll be reflecting on all we did right, but also all that we lost sight of or totally messed up on. Then retooling our new shop and providing the same great service that we did for so long with Fatkat but with some mighty big changes and improvements. We’ll be looking to put the finest ex-Fatkat artists to work as quickly as possible. I urge you all to reach out early and often to keep top of mind. Thank you for staying in the area and for your loyalty to me and Miramichi. We’re by no means done yet, as a matter of fact, we’re just getting started! I’m off to spend some much needed time with my family, again thank you for 10 glorious years with Fatkat. I look forward to many more as Loogaroo.

Not really much else to add. Very sorry to see the company fold, but these things happen. It’s business.
Fingers crossed and best of luck with Loogaroo.