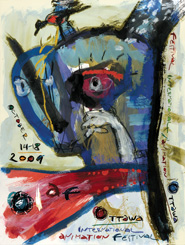 OTTAWA ANIMATORS BATTLE IT OUT IN INTERNATIONAL COMPETITION!

From the record breaking 2185 entries received, 98 films representing 20 countries have been chosen for Official Competition. An additional 58 films will be shown in out-of-competition Showcase screenings. This year’s film selection is comprised of film, video, and digital animations from Germany, France, Russia, Australia, South Korea, the U.K., Israel, Sweden, the U.S.A, Italy, Brazil, Japan, and Canada.

For the second year in a row, Canterbury High School has a young artist in competition. Benjamin Woodyard’s All The Time, will make its world debut at this year’s Festival. Last year, student Will Inrig took home top high school honours for The Depose of Bolskivoi Hovhannes. Woodyard will be taking on other Canadian competitors in the High School Animation category as well as directors from South Korea and the United States.

Also adding some local flavour are well-known animation artists, Nick Cross and Dave Cooper, who will debut their music video for Danko Jones’ “King of Magazines”. Dave Cooper made a name for himself as an underground comicbook artist in the ’90s. At the turn of the century, Dave turned his attention toward oil painting and has shows scheduled for this fall in Ottawa, and the summer of 2010 in New York. Nick Cross, no stranger to OIAF audiences, is an award-winning animator. His most recent short, The Waif of Persephone competed at the 2007 OIAF.

“There was a time when it was rare, if not miraculous, to have a local animator competing in the OIAF’s competition screenings,” says OIAF Artistic Director, Chris Robinson. “Thankfully this is changing and it’s now become unusual if we don’t have some local representation in competition. It’s a tribute to the artistic community in this city that we’re producing artists who fit right in on the international stage.”

Other highlights of this year’s OIAF competition include: Henry Selick, the director of the stop-motion classic The Nightmare Before Christmas is back with Coraline, a dark gem about a little girl who discovers a too-good-to-be-true world behind a secret door; twice Oscar-nominated Cordell Barker, who brought us The Cat Came Back, is once again at his best with Runaway; four-time Academy Award winning director, Nick Park shows his latest Wallace and Gromit: A Matter of Loaf and Death; and U2’s latest music video for “I’ll Go Crazy If I Don’t Go Crazy Tonight”, directed by David O’Reilly.

A complete listing of all the film selections can be found at:

The Ottawa International Animation Festival is one of the world’s leading animation events providing first class screenings, exhibits, workshops and entertainment since 1976. An annual five-day event bringing art, industry and inspiration together in a vibrant hub that attracts artists, production executives, students and animation fans from across Canada and around the world. 2008 total attendance was over 25,000. OIAF 09 will be held October 14 – 18, 2009 in Ottawa. For more information and to experience OIAF online, please visit www.animationfestival.ca.