This is coming a little late, but our friend Dominic reviewed Hayao Miyazaki’s latest, Ponyo, over at Suite 101. 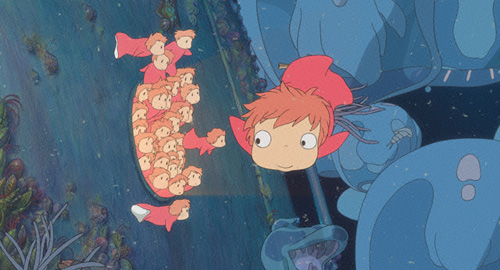 I managed to catch an advanced screening of Ponyo a few weeks ago.  I loved it.  This movie marked a stylistic departure for Miyazaki.  The animation is simple and elegant, and the art direction is stripped down and visceral, with backgrounds done in coloured pencil.  The film felt incredibly immediate and intimate.  The distance between director and audience felt very close.

Ponyo is funny and touching, my seven year old daughter loved it, I loved it.  It is heartfelt and earnest.  I wish I’d done more to publicize it’s release beforehand.  Like Coraline last winter, this is a movie we should all go and see.  We should bring ten friends.  We need to show our pals that these movies exist and show the studios there’s an audience for them.

Before closing, I need to mention the impression this film left me with.  I’ve heard nothing to substantiate this, but I left the theatre with the distinct impression that this film was Miyazaki’s response to Hollywood’s current infatuation with super-slick, highly rendered, Pixar/Dreamworks 3D far.  This was the most analogue-feeling film I’ve seen in ages.  Disney/Pixar is trying to show the world that 3D isn’t what makes a story good with their upcoming release of the Princess and the Frog, but I think Miyazaki beat them to it here.  The story is what counts, a truism that today’s audience needs to be lead to understand.