I don’t know if any of you guys check out the RSS feeds I have posted at the lower left. The top one is Cartoon Brew, run by Amid Amidi and Jerry Beck. It’s there because it’s the best site for everything animation, hands down. Amid and Jerry complement each other perfectly and run a top notch site, with a global view. Not a day goes by that I don’t want to pretty much cut and paste everything they post. But I do try to stick to Canada, Jerry and Amid have everything else covered, and there’s just no way I could ever compete. But once in a while I make an exception, and this Youtube video of Gene 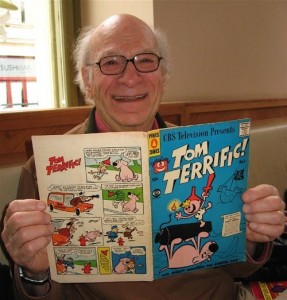 Deitch is one of those times.

As far as who Gene Deitch is, that’s homework. Google him. In a nutshell, Gene’s an old time animator with all his marbles. He started out at UPA decades ago and now lives overseas. This video is well explained in the post at Cartoon Brew, and I urge you to hit the link and read it through. But I’m a sucker for an old guy telling it like it is, especially about animation. So, without further ado, Mr Gene Deitch: