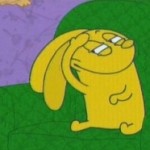 This is the original short, by Graham Falk and Dan Craig. It was made for it’s own sake, and to see if they could produce a traditional cartoon digitally. This was back in the mid-nineties, before digital production had become the norm. A second short was made a few years later, followed by a series, aimed at kids, that played on Teletoon.