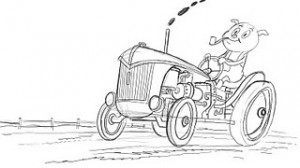 Award-winning Canadian animator, Nick Cross showed off a few drawings from his latest independent short, The Pig Farmer, over on his blog Friday. Nick is familiar to regular readers of this site as the director of a long list of animated shorts, most recently, 2009’s Yellowcake. These films take a long time to produce, as Nick self-finances doing service work for television animation.

This time, though, Nick is taking a different approach. He’s signed up on IndieGogo, a fundraising resource for independent creative projects. I first heard of IndieGogo from a friend of mine, and fellow animation professional, Steve Valdez. Steve has been working on his short, Round One, for some time now, and was able to raise a few dollars through IndieGogo in support of the film.

I gave IndieGogo a try about a month ago. I’m working on a short myself right now, and was curious about IndieGogo’s model. I’ve raised 350 dollars so far. But here’s the catch: IndieGogo only pays out when you reach incremement sof 500 dollars. It’s a great moneymaking model for IndieGogo. There are obviously tons of projects on there that never hit their targets, so even if IndieGogo never touches the money that’s been committed to those projects, they’re sitting on a chunk of capital and earning interest on it everyday. For little guys like me, it gives us a formal channel to seek out financing from our personal online network without going begging.

For someone like Nick, this could really work. He’s a proven film-maker. He has a small, but broadening following. And he’s getting press. Cold Hard Flash already ran an announcement, and now I’m doing the same. I’m going to be sure to put some cash behind Nick’s film, and I encourage anyone who loves cartoons to do the same. I see comments already appearing along the lines of “wish I could”, or “I’ll support when I can”. I understand that times are tough, and yes, in this kind of endeavour, the thought really does count. But I challenge everyone who wants to see Nick’s film to toss five dollars at it. Just five. We can all swing five bucks. Everyone currently getting a paycheck: 5 bucks. I dare ya.

As for the The Pig Farmer, here’s what Nick has to say:

This film represents the seventh independent film created in twelve years.
All of my previous films have been completely self-financed, with a consequence being that they must take a backseat to commercial work which pays the bills. Thusly, I’m hoping to try some alternate means of financing, this being one of them.
My films to date have enjoyed a wide audience through international film festivals as well as on the internet and I am hoping that this film will be no different.
So, here’s your chance to help make the magic happen. Help bring this cartoon to life by becoming a funding partner today!

Best of luck to Nick with his new film, and go get your name in the credits here.

UPDATE: Amid Amidi has chimed in on crowd-soucing over at Cartoon Brew.  Click here to read his take.