press release: Higglety Pigglety Pop! from the NFB and the makers of Madame Tutli-Putli 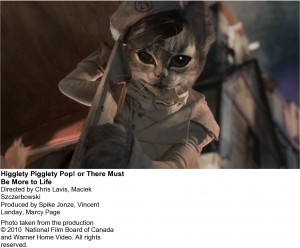 Toronto, February 16, 2010 – The National Film Board of Canada and Warner Home Video present a new  live-action/animated adaptation of Higglety Pigglety Pop! or There Must Be More to Life based on the  book by Maurice Sendak. A film by the creators of the Oscar-nominated short Madame Tutli-Putli, Chris  Lavis and Maciek Szczerbowski, features the voices of Meryl Streep and Forest Whitaker. Produced by  Spike Jonze, Vincent Landay and Marcy Page.

Higglety Pigglety Pop! or There Must Be More to Life will be featured as an exclusive short on the Where  the Wild Things Are Warner Home Video Blu-ray out March 2. On February 28, the film will have its world  premiere at the Festival International du Film pour Enfants de Montreal (Montreal Children’s International  Film  Festival)  followed  by  a  special  presentation  with  the  directors  and  the  puppeteers.  The  NFB  will  distribute a DVD scheduled for summer 2010.

Higglety Pigglety Pop! or There Must Be More to Life tells the story of Jennie, who once had everything.  She had two bowls to eat from, two pillows, and for cold weather a red wool sweater. She even had a 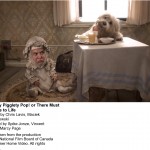 master  who loved her. But Jennie didn’t care. In the middle of the night she packed everything she had in a black  leather bag with gold buckles and looked out of her favourite window for the last time. Higglety Pigglety  Pop! or There Must Be More to Life follows Jennie’s surreal, suspenseful and unexpectedly moving journey  to gain new experiences and realize her dream of becoming the star of the World Mother Goose Theatre.

Since 1997 Chris Lavis and Maciek Szczerbowski have formed the artistic partnership called Clyde Henry  Productions. The pair have created award-winning films, ads, illustrations, comics, and music videos. Their  first professional film, Madame Tutli-Putli, produced by Marcy Page for the National Film Board of Canada,  received international acclaim – over 50 awards to date, among them the Best Short Film and Rail d’or prizes  at  the  Cannes  International  Film  Festival  and  an  Academy  Award 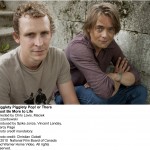 Nomination  in  2007.  Lavis  and  Szczerbowski are currently working with the NFB and Silo Corporation on a feature film project entitled The  White Circus co-produced by Lago Film (Germany) and Apple Film Production (Poland). In 2008 The White  Circus was selected for development by the Sundance Film Institute’s screenwriting lab.

Higglety Pigglety Pop! or There Must Be More to Life is produced by the National Film Board of Canada  in association with Warner Home Video.