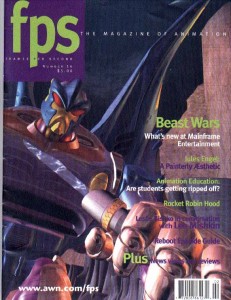 This came in late last night from Tamu Townsend via Facebook. It’s also up on the FPS blog.

At 11:59, I don’t plan to add further animation-related content to fps.

In its earlier form, it was a print animation magazine founded and edited by Emru Townsend. Its first issue was in 1991, spawned from a science fiction/animation fanzine called Quark. Seven years ago today, Emru wrote his first online review for fps, which he reincarnated as a website, blog. Five years ago, he released the first issue of the PDF magazine.

I plan to do some work on the site in the near future, including making all of the PDF magazines free downloads.

After I tie up loose ends, the site will remain active. If you haven’t been with us since the beginning, please take some time to look through the blog, and explore the site’s archive of interviews, commentaries, podcasts and reviews.

There are countless people to thank and I have no minutes left. I hope you know who you are.

Tamu is a friend and an early contributor to the Canadian Animators Facebook group. She’s been a big supporter of this site and is a big presence in our community. Her brother, Emru, mentioned in her note, founded FPS. He passed away at the end of 2008 after a prolonged illness. FPS has been less active lately, and I guess this was bound to happen. It will be leaving behind a big hole in our landscape.

I’ll make sure we put up a proper link to the archive that Tamu is putting together. It’s going to be invaluable.

I read Frames Per Second