the challenge of animation, part IV: TCAF and Animation, by Mark Mayerson

I linked to this yesterday, but I really feel it needs to be read.  I asked Mark Mayerson if I could repost it and he was good enough to say yes.

So, here are Mark’s words: 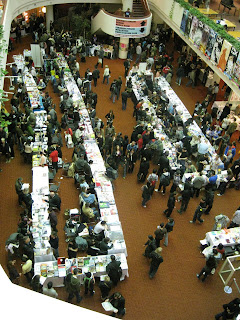 Last weekend, the Toronto Comic Arts Festival was held at the reference library at Yonge and Bloor. The picture at left is only a portion of the festival. There were three more rooms of exhibitors and three rooms to house panels on various subjects.

The enthusiasm and productivity in the comics field these days is staggering. Besides publishers who are specializing in graphic novels, there are hundreds of individuals who are creating work that they self-publish in print or on the web. The work, of course, is of variable quality, but the energy level is high. No one attending could doubt the health of the field or its prospects for the immediate future.

Animation artists are some of the people who are gravitating towards comics. Certainly, at Comicon International in San Diego, artists from studios like Disney and Pixar have been publishing and selling personal work. Canadian animation artists are also moving in that direction, including some Sheridan graduates. 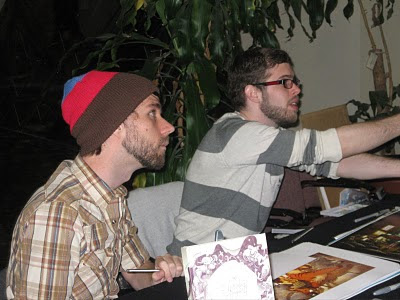 Sam Bradley (at left) and Nick Thornborrow were there selling The Anthology Project, a collection of work by 15 artists (several of them Sheridan grads) in a full colour hardcover collection similar to the Flight volumes. Copies can be ordered here (and are available in these stores) and you can see art samples here. A second volume is already planned. 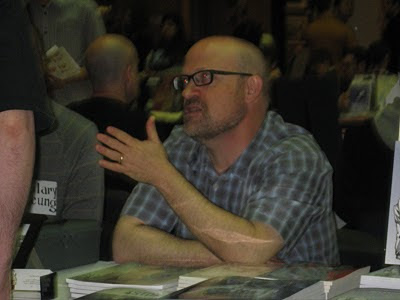 Paul Rivoche, comics artist and designer for many WB superhero animated shows was once again at TCAF, meeting fans and selling collections of his artwork. Paul is currently working on a graphic novel adaptation of The Forgotten Man: A New History of The Great Depression by Amity Shlaes.

I had the pleasure of meeting Graham Annable for the first time. Graham is currently doing story work at Laika (he helped board Coraline) but has been doing is own comics and animation for years. His YouTube channel has 10,000 subscribers and Dark Horse has recently published The Book of Grickle, a compilation of much of his comics work.

Graham’s animation work is minimalist and his humour is deadpan. Both work well with the limitations of being an independent animator. His work on YouTube is the basis for a videogame that will be available come June.

While it was great to see animation people taking advantage of the possibility of comics, the vibe on animation was not all good. I ran into a veteran storyboard artist, who told me that he called several management-type folks he knew and suggested they attend TCAF, looking for properties. Of the four he called, only people from Starz, an American company, said they’d be attending. Hollywood regularly treks to San Diego to look for ideas, but Canadian producers and broadcasters can’t be bothered to look in their own back yards.

The panel Indie Comics and Indie Animation (from left: Jay Stephens, Faith Erin Hicks, Troy Little, Meredith Gran and Graham Annable) came down firmly on the side of comics over animation. Hicks and Gran are both working on comics full time now and not sorry to be out of the animation industry. Hicks is working on a graphic novel for First Second, Friends with Boys, and Gran has done some animation to promote her web comic Octopus Pie. The general feeling was that the freedom in comics was preferable to the assembly line nature of the service work that Canada seems to specialize in. As Stephens, Little and Annable have all gotten animation projects off the ground based on their comics work, it’s clear that the animation industry in Canada is ignoring the talent it employs and in some cases actually driving it away.

Comics are definitely ascending at the moment and Canadian animation, at best, is standing still. Talent will flow towards the greater promise and unless Canadian animation can figure out a way to generate some excitement and provide greater creative opportunities, its long term health doesn’t look promising.

Addendum: Something I’ve realized is that comics right now are a bottom-up phenomenon. Because the barrier to entry is low, the field is being driven by the large number of people who expressing themselves through comics. It’s been this work, dating back at least to the 1980s that’s allowed the field to hit a critical mass where mainstream publishers and bookstores are now invested in the field.

By contrast, due to the high cost of production, animation is a top-down phenomenon. As there are always fewer people at the top than at the bottom, and as business people are generally conservative –preferring to imitate proven successes rather than take chances– animation has much less variety. It’s more difficult for individual artists to have an impact on the wider field.

However, in the 1960s and ’70s, comics were a top-down field as well. The field was dominated by just a few companies (Marvel, DC, Archie, Harvey) who turned out a narrow range of material and imitated themselves and each other. In the 1970s, newsstand sales tumbled and eventually the direct market and comics shops were born. The changing economics of the shops vs. the newsstands left some room for niche comics like Cerebus, Elfquest, Hate, Eightball and Love and Rockets and publishers like Fantagraphics. It was from these roots (and the earlier underground comix of the ’60s) that produced the graphic novels of today.

The urge for self-expression was always there, but only when the economics of comics changed did the artists have room to begin pushing up from the bottom.

My hope (which might be a vain one) is that now that the economics of film and TV are beginning to change due to the web, animation artists will get the same chance as comics artists to start pushing the industry from the bottom up.