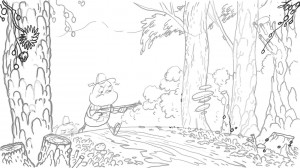 FINAL UPDATE! ONLY THREE HOURS (3 HOURS) TO GO!! NICK’S ALMOST HIT 4000 OF HIS 5000 DOLLAR GOAL! IF YOU ARE AWAKE AND READING THIS, AND YOU HAVE A CREDIT CARD, AND YOU LIKE COOL CARTOONS, AND HAVE A HEART, PLEASE GO CHECK OUT THE CAMPAIGN AND HELP PUT HIM OVER THE TOP!!!  GO HERE NOW!

For the next 19 hours, I’ve removed the Canadian Animation Resources funding drive tab from the right-hand side of the page, and replaced it with the link to Nick Cross’ IndieGoGo page for his latest film, the Pig Farmer.  Nick’s in the homestretch of his IndieGoGo campaign, with less than a day to go to meet his goal of 5000 dollars.

For those of you who aren’t yet familiar with his work, allow me to carry on a bit.  Nick is, in my opinion, the top talent in Canada.  He’s been making short films for over ten years, completely in his free time, while maintaining a career in this industry doing service work.  He understands the language of cartoons, and uses that language to disarm his audience, to seduce them with something that is familiar to us all, while telling us stories that speak to the troubles of our world and criticize the role our culture plays in it.  Nick makes cartoons, pure cartoons.  And he’s damn good at it.  “Yellowcake”, his previous film, is damn near perfect.

And now he’s working on “the Pig Farmer”.  Like all the films he’s made before it, I’m sure it will surprise me, and completely fulfill my expectations of Nick and his craft.  I’m getting on board, so should you.  So hit the tab, check out the perks and sponsorship levels, and head over here to Nick’s blog to see his progress and other work.

Here’s a snippet of animation he posted a while back.

The Pig Farmer – Scene 2 from Nick Cross on Vimeo.

So stop wasting time, go drop a coffee’s worth of cash on Nick’s film, and show your support for independent cartooning!