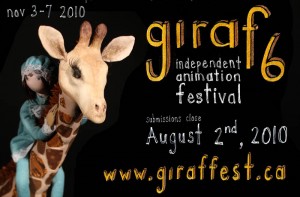 The Giant Incandescent Resonating Animation Festival is the only exclusively
independent animation festival in Canada, with a focus on experimental and
self-produced animated film. GIRAF plays an essential role in the promotion,
education and appreciation of independent animation from around the world,
exposing hungry local audiences to the best animated content from at home
and abroad.