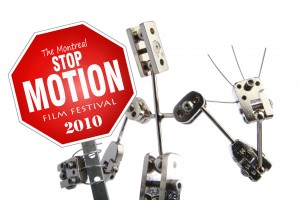 To enter your film in the festival, download a submission form, fill it out, and send it, along with your film.

Please refer to the entries section on our website for answers to any questions you might have concerning eligibility, dates, accepted formats, and new rules.

This year, the professional segment has been updated with a new category for
films-commercials less than 1 minute in running time and we will have more guest
appearance during this week-end long event that promises to be super cool!

The festival will be held in Montreal, from the 29th to the 31st of October 2010

Help us spread the word and tell all your Stop Motion friends to participate and join us
for the coolest festival around!