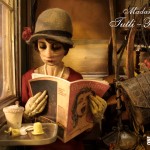 From NFB.ca: This stop-motion animated film takes viewers on an exhilarating existential journey into the fully imagined, tactile world of Madame Tutli-Putli. As she travels alone on the night train, weighed down with all her earthly possessions and the ghosts of her past, she faces both the kindness and menace of strangers. Finding herself caught up in a desperate metaphysical adventure, adrift between real and imagined worlds, Madame Tutli-Putli confronts her demons.