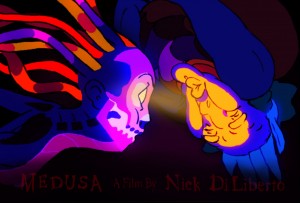 I saw this via some Facebook friends and just had to track down the artist who made this thoroughly arresting short film. Once I had, Nick DiLiberto kindly answered CAR.CA’s patented ‘8 Second Exposure’. First of all, here’s the piece:

2) Where ya from? Hamilton Ontario Canada

3) Where’d you get the inspiration for this story? I had been wanting to do a fully animated 2D short for sometime, and when an opportunity came I jumped on it.

4) What media did you use to animate this film? You’re looking at a fully 2D classically animated film. lots of Pencils and paper.

5) Whatcha doing for money? Right now I’m living in Japan working at a video game company as an animator.
Its a really crazy experience.

6) Where can we see more of your stuff? At the moment there’s only the 2 shorts I put up on youtube, everything else I have to keep secret but you can expect more in the future. (catch his YouTube channel HERE )

I just want to add that I really appreciate all the great responses I’ve been getting, its so much more than i had imagined. I’m so happy that people are enjoying the film. Thanks for all the great comments and thanks for the interview Warren.

No, thank YOU, sir DiLiberto, for making this exciting little ditty and sharing it – and your perspective on unicorns – with us.