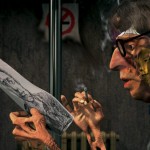 From NFB.ca: This Oscar-winning animated short from Chris Landreth is based on the life of Ryan Larkin, a Canadian animator who produced some of the most influential animated films of his time. Ryan is living every artist’s worst nightmare – succumbing to addiction, panhandling on the streets to make ends meet – Through computer-generated characters, Landreth interviews his friend to shed light on his downward spiral. Some strong language. Viewer discretion is advised.