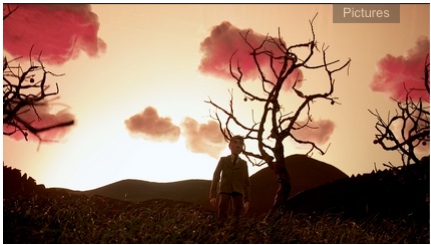 “Set to some haunting downtempo music by Gypsophilia, this arresting stop-motion animation tale tells of a man in search of love in a winding meadow and forest. When he finds it, it’s not quite what it seems.”

Director’s Bios (from their websites):
I’m Jason, a Director, Designer, Animator and Editor based out of Halifax NS. I like cartoons, media art, music videos and delicious food. I want to Direct feature films. Hire me to brand your rubber band company or your band.

Sydney Smith is an artist based in Halifax, Nova Scotia. He was educated at the Nova Scotia College of Art and Design. His traditional drawing style has captured the attention of both the young and old and the admiration of other artists. Renowned for his narrative imagination, Smith is creating an impressive body of work that has been featured in print, fabric, large-scale installations, and animation. Using tradional mediums such as Ink and watercolour, Smith sources older illustrators such as Arthur Rackham, Japanese Woodblock prints, Rennaisance paintings and etchings, comics, and fellow contemporary illustrators and image makers. Smith’s images evoke a sense of fantasy and the subconscious, often referencing his own dreams.