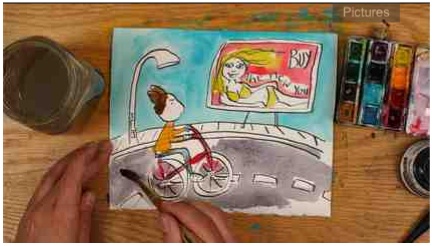 “Combining colourful storyboards and lyrical narration, acclaimed filmmaker Andrea Dorfman reminisces about her own budding romance with a plastic surgeon. When his profession leads her to focus on her own perceived imperfections, Andrea is forced to confront feelings about both herself and her boyfriend’s job.”

Director’s Bio (from her website):
I am an artist and filmmaker and I’ve made experimental and dramatic short films, two feature fims – Parsley Days (2000) and Love That Boy (2003) – as well as a documentary, Sluts (2005). I’m currently working in animation at the National Film Board of Canada and developing my third feature film, Harmony, with screenwriter, Jennifer Deyell. I sometimes teach film and video at the Nova Scotia College of Art and Design and I’m one of 4 co-creators of Blowhard, a thematic storytelling series. I live in Halifax, Nova Scotia, with a cat, a dog, some fish, my boyfriend, Dave, and (half of the time) his kids Max and Sydney.