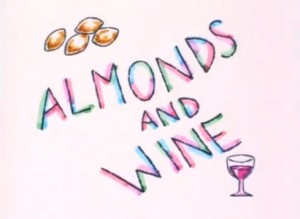 After seeing this wonderful film posted on Mark Mayerson’s blog, I just had to find out more about the artist behind it. Toronto-based artist Arnie Lipsey was kind enough to play our patented ‘8 Second Exposure’ which is posted after his film. There’s even a BONUS film in the Q&A! Enjoy:

2) Where ya from?
Originally from Montreal, but that was long ago, in a land far away…

3) Whatcha doin for money?
As the heir to the vast Lipsey fortune, money is rarely a consideration.

4) Where did the inspiration for this piece come from?
As an animator working in the industry, I needed to find something to do during “off” times, and had always wanted to work on short personal films (after all, I was trained in Montreal, and the NFB was always the ideal). And so over time I managed to produce two of them (a previous film, “The Crow and the Canary”, and more recently, “Almonds and Wine”). A&W started from an interest in the revival of Klezmer music. It seemed apparent to me that klezmer was the missing link in understanding the roots of 20’s jazz, and in fact strains of it can be heard on sound tracks of old timey musical cartoons. I thought it might be interesting to interpret a piece of pure, unjazzified klezmer for a personal animated film; to go back to the source, as it were. And using it to depict the history of Eastern European Jewry’s immigration to North America in 5 minutes seemed an appropriate challenge.

5) What did it inspire others to do?
Jeez, you’d have to ask them…

{Ed. note – for starters there was a mural of the film installed on the west side of Bathurst Street, two blocks south of Lawrence Avenue in Toronto. It was built by Cristina Delago. Pics HERE, HERE and a vid of the opening ceremony HERE! Arnie’s too shy to mention it, but we’re not because we think you should go see it!}

6) Where can we see more of your stuff?
The Crow and the Canary is also on YouTube:

8 ) And the best kosher bakery in all of Toronto is – ?
Not really into Kosher bakeries, but don’t get me started on bagels (There’s only one kind worthy of the term- the Montreal Bagel. An authentic facsimile is available in Toronto at The Bagel House.)

Thanks for playing, Arnie!
It was fun!

If you or anyone you know is knocking it out of the park and posting their films online (and I guess happens to be from Canada), contact us and we’ll give ’em the ol’ ‘8 Second Exposure’!