showcase: ‘How To Be Alone’ – Tanya Davis & Andrea Dorfman 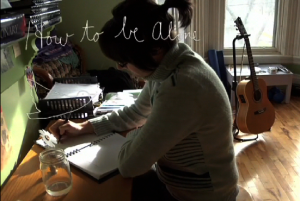 After seeing how this short racked up 1,063,244 views on YouTube in just two and a half weeks, I just had to track down the collaborators of the gentle yet stalwart film ‘HOW TO BE ALONE’ (2010). It has obviously struck a chord and is filling a void for viewers. Not only that, but I like it. A lot.

The filmmaker half of the creative team, Andrea Dorfman, was kind enough to answer our patented ‘8 Second Exposure’. UPDATE – Tanya Davis, the poet half of the team, also replied this week! We’ve just folded in her answers below. So we’re reposting it.

2) Where ya from?
ANDREA: I am from Toronto but have lived in Halifax since ’92.

3) Where did the inspiration for this project come from?
ANDREA: When Tanya and I first met, I had just gotten into a relationship after being single for a while and Tanya had just become single after being in a relationship for a while. As we were getting to know each other, we talked a lot about the worthiness of being alone. We decided to apply to Bravo!Fact for a grant to make a film based on one of Tanya’s poems but she wanted to write something new and asked me to give her a theme of something she could write about so I gave her the title, How to be Alone, and said, ‘okay, go!’. The rest is history.

TANYA: yes, andrea and i were talking a lot about being alone, solitude, art, loneliness, inspiration. and we already had wanted to do a videopoem together, so we thought we’d do it on this subject.

4) What governed your choice of media for it?
ANDREA: I had the idea that I wanted live action mixed with hand drawn animation but had never done it before. I asked my friend, Sam Decoste who was an imaging technician at the NFB in Halifax a few questions and just sort of figured out how to do it. I wanted the animation to feel like these were Tanya’s thoughts, or ideas that she’d write about in a journal or sketch in a book…

TANYA: andrea is a filmmaker and i am a poet/musician so videopoem seemed fitting. also, she has recently gotten into animation so wanted to include some
5) Whatcha doin for money?
ANDREA: Right now I am doing the second of two animated short films at the NFB in Halifax and I am teaching a video class at the Nova Scotia College of Art and Design in the fall. I also occasionally work as a cinematographer for hire.

TANYA: i try to make money through the arts. grants, donations, odd jobs, touring, record sales.. debt, credit, investment, etc etc
6) Where can we see more of your stuff?
ANDREA: On my youtube channel  http://www.youtube.com/user/andyradorfman or my website www.andreadorfman.com also, you can get my two feature films PARSLEY DAYS (2000) and LOVE THAT BOY (2003) from the video store (only the very awesome hip ones though – they’re minimally distributed).

TANYA: tanyadavis.ca for more of my stuff
7) Future plans?
ANDREA: Make more films, make more art, spend as much time as I can with people I love and eat great food.

TANYA: i have a record coming out in november. then some touring. also, i;m writing a solo show based in performance poetry. Andrea has lots on the go, always. We will be doing another project together, too.

8 ) Do garden gnomes really do the gardening at night?
ANDREA: Duh!

TANYA: garden gnomes are contemplatives who sit around and play classical guitars and serenade the night bugs.

So there you have it, folks! If you or anyone you know is hitting it out of the park & posting animation films online, drop us a line & we’ll drop the ‘8 Second Exposure’ …on them.