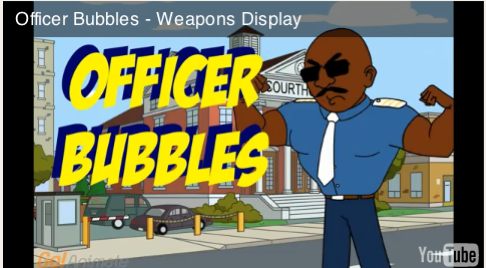 Holy Streisand Effect. Well, you must have heard of this one by now. Over the past few months, a Toronto officer policing the G20 this summer was satirized with some YouTube cartoons, and he’s just not going to take it anymore. So he’s filed a lawsuit against YouTube & Google to get the anonymous users’ names, I imagine to sue THEM too.

Where do I start? I guess I should point you to the original article in the Globe & Mail,  Toronto Star,  Montreal Gazette, The Leader-Post, the Vancouver Sun, and the CBC. What’s really at stake, however, is more than a few civil liberties issues that need to be worked out in this country. The G20 has already proven to be a black eye in terms of the way it’s been handled and our courts are still tied up with issues stemming from it and will be for the forseeable future. Well, here’s another one.

Cartoon Brewer Amid Amidi makes a valid point on the role of cartoonists and our ability to satirize, without threat of legal action, public personas or political situations. BTW – I think the whole issue of what a public persona consists of is getting murkier. Almost everyone reading this has a ‘public persona’ on Facebook, MySpace, YouTube, or any other numbers of social media sites. That’s another idea for another time.

What concerns me the most isn’t that one of the world largest media company Thomson Reuters is going to shift away from anonymous comments on its site as will the CBC, New York Times, Washington Post, and many others. YouTube/Google being forced to ‘out’ it’s users in a court of law doesn’t really bother me either although I guess it should from a privacy violation standpoint – however, I feel that if you’re  posting your opinion anywhere, you should be willing to stand by your words even if you’ve changed your mind on a subject.

What gets me is that most politicos don’t register that this court action might construe a misinterpretation of the rights to expression. Not by anonymous commentators – I honestly think owning up to what you’ve typed is the only ethical thing to do, one shouldn’t be able to get away with spewing truly harmful vitriol without any repercussion, as some of the officer’s commenters are quoted as doing – but by the  person who put these cartoons together in the first place.

They’re making an admittedly nasty caricature, yes, and it’s fairly mean spirited, but I wonder if making that cartoon falls under that artist’s freedom to express an opinion. If the character was named anything other than ‘A. Joseph is…Officer Bubbles’ would the results be the same? Would the person who cobbled these cartoons together using a free webware still be held liable if they just refrained from using ‘A. Joseph’ and left it at ‘Officer Bubbles’?

Well, I don’t know about you, but I think the MP being most vocal about this case in these articles might need a heads up. I didn’t get that this line between personal slander and public satire had even occurred to him in the following quotes (from the article linked HERE):

“Media outlets have to be more responsible in this situation,” said Shawn Murphy, a Liberal MP from Charlottetown.

“I’m not advocating censorship, neither is anyone else but . . . it’s something that has to be discussed publicly, and they have to come up with some kind of a framework to try to deal with this very disturbing situation.”

Last month, Murphy asked the Charlottetown Guardian and the CBC to review their commenting arrangements because of a stream of “hateful, many times untrue and potentially defamatory” posts he said he’d seen on their websites.

Murphy said the comments are often aimed toward visible minorities and religious groups — “people that generally don’t have the opportunity to defend themselves.”

CBC responded by announcing a company-wide review of its commenting policies, which could include forcing commenters to use their real names when posting.

Despite what many may think, the anonymity provided by the Internet — what Murphy calls “keyboard courage” — does not make it any different before the eyes of the law.

If comments on a news outlet’s website are proved to be defamatory, then the company is just as responsible, legally, as if the offending statements were in printed in hard copy.

This isn’t the case in the United States, where newspapers are protected against litigation for online comments due to a provision of the Communications Decency Act.

“Legally, there’s no difference,” said Murphy. “If you publish it, you have to be able to prove it. Every aspect of it.

“We’re kind of plowing new ground here, and it hasn’t sorted itself out. I question whether the mainstream media are really aware of some of their risks they’re accepting.”

And I question whether MP Shawn Murphy has considered what might be compromised on what’s fair game for satirical interpretation if A. Joseph decides to sue the cartoon’s creator. According to ‘A Sourcebook of Canadian Media Law’ by Robert Martin and Gordon Stuart Adam, the defence of fair comment are ‘fairly well known’:

“First the matter must be recognizable to the ordinary reasonable man as a comment upon true facts, and not as a bare statement of fact. Secondly, the matter commented must be one of public interest. There must, in short, be a public nexus between the matter and the person caricatured. […] the cartoonist may not intrude upon the private life of a public man, no matter how interesting such an intrusion may be to the public, nor may he expose a private person to unsought publicity.”

Now that’s a kettle of fish. More on that at Google books.

I suggest you drop Shawn Murphy, MP a line if you think this might be a case where the fair comment aspect of media law might be undermined. Myself, I’m going to be watching this story with some interest. I’ve never bothered to make slanderous comments about anyone online but I demand to be able to make fun of people in public roles whenever they’ve earned it. I’m not anti-cop, some of my best friends are cops and crown attorneys as the saying goes, I’m just anti-dumb.

For your edification, here’s the clip that started it all. Of course, who knows, this girl could have spent the hour previous to this clip taunting and berating this officer who dislikes bubbles so much: