From the internets, URBMN interview with Troy Little 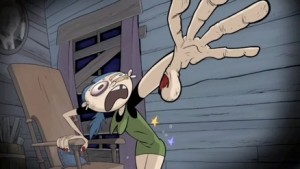 Friend of the site, Cameron Archer, has a posted a short interview with Troy Little, Eisner-Award-nominated graphic novelist, animator, dad, and coffee junkie, over on his URBMN blog.

Troy is one of the creators, along with Nick Cross, of Angora Napkin, the pilot for which will be airing on Teletoon this coming Halloween at 11:30 pm.  It’s a great cartoon.  No hyperbole.  GREAT.  And it’s truly a cartoon, in the best sense of the word.  I’m a big fan, and an old friend of Troy’s and Nick’s.

They’ve both been good enough to provide us with rare Angora Napkin comics to run here on the site over the next few weeks, so you’ll be seeing a lot more of them leading up to Halloween, when I encourage you all to tune in and see the show for yourselves.

In the meantime, head over to URBMN, where you can read Troy’s pearls of wisdom, like this comment, on the state of television in Canada:

I have no real opinion on that, as I haven’t had cable TV in years.  Even the CBC is too fuzzy a reception to watch, so I have no real way to gauge that.