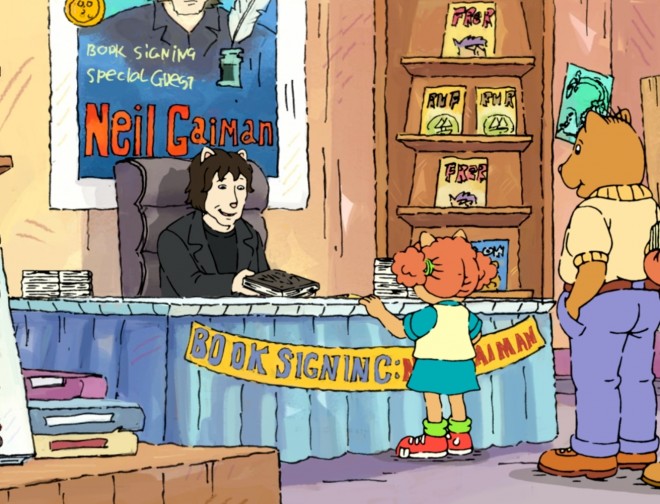 I first noticed this in an article posted on WIRED! last month. Neil Gaiman will make a guest appearance on Cookie Jar’s series ‘ARTHUR’ airing on PBS Monday, Oct. 25 as part of a Hallowe’en week run-up for the kids.

I’m just going to assume you know who Neil Gaiman is (creator of ‘Coraline’, ‘The Sandman’ et al), but if you don’t know –  and there is no harm in that – check out his site HERE. Well, once I read that article, I just HAD to follow up. I managed to track down the series director Greg Bailey and asked him if he had any anecdotes to share. Here’s what he had to say:

“The day we recorded Neil was the day he heard he was being nominated for an Oscar. He didn’t win but he was pretty pumped at the time.

He was very co-operative and accommodating through the process of the doing the Arthur show in which he appeared . He sent us photos to base our design on. Although he kept sending us ones where he looked quite young. He always insisted on being dressed in black which I take it is his trademark.

I was sent his tweet that came out the day he did the recording and there was quite a buzz from tv geeks about the show. I will try to dig it up for you.

We featured a book cover of his as yet unpublished book in the show. The book may be out now but at the time it was not printed yet.

There are a few scenes where Neil as miniature version would appear in Sue Ellen’s imagination. In one scene he was supposed to appear when Sue Ellen is in the Sugar Bowl trying to design her graphic novel. I thought the scene was kind of flat so I wanted something to make it a little more magical and weird since the episode is about this weird graphic novel Sue Ellen writes and illustrates with the help of Neil. I had changed around the scene at the storyboard stage so that he was dressed in a wetsuit and snorkel. He dives into Sue Ellen’s milkshake during the scene just for no real reason other than it makes it all the more surreal.

Neil saw the storyboard for the first time at the recording with this scene and thought it was pretty nice.

He was very relaxed and liked to ad lib a lot of his lines to keep himself more natural. “

So if you’re a Neil Gaiman fan, and your kids happen to be Arthur fans, it’s a win-win! Tune in Oct. 25. Check local listings for timeslots.

Special thanks to Greg Bailey for the anecdote!