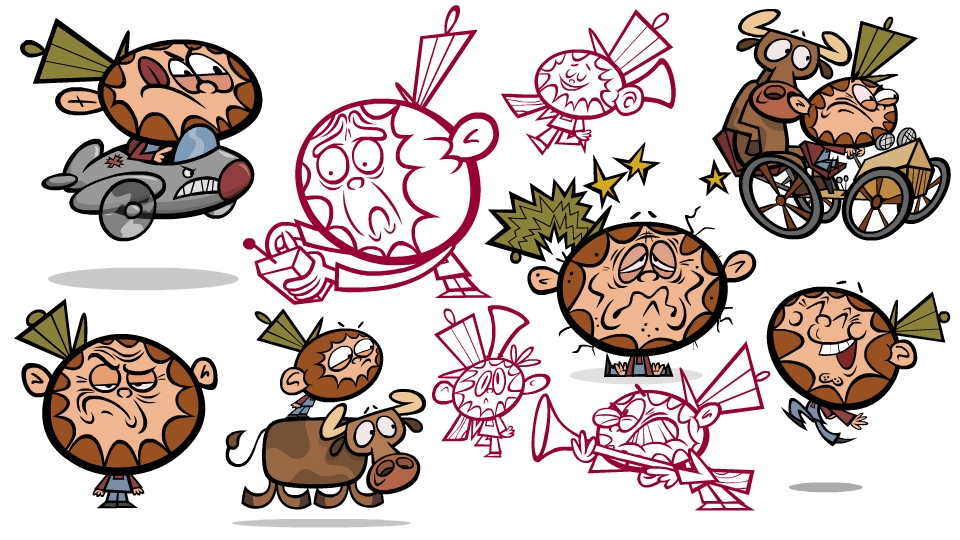 Mike Geiger’s ‘County Ghost’ webseries has been floating around for a while, but since Hallowe’en is this weekend, I thought it was high time to get the poop on the skinny, so I asked him all about it! Here’s my favourite one of the four eps he’s got so far, and they’re all good:

Mike’s an interesting guy – one of his many claims to fame is making what is quite possibly the MOST DISGUSTING animated short in the entire Spike & Mike’s Festival’s history. You can watch that by clicking HERE, but be advised it is NSFW and pretty grody.

Here’s what he had to say about his ‘family friendly’ webseries ‘County Ghost’ (if you consider moonshine and shotguns family friendly):

⁃ Where did the idea for County Ghost come from?
wow, good question. I think this was one of those cases of just sketching some doodles when the farmer popped out, then the ghost, and soon after the series sort of evolved on its own.

⁃ Are you scared of ghosts?
Well, my girlfriend has a bunch of crazy stories that can make your hair stand up straight. In fact, sometimes I try to think of other things when she tells the stories to people so i don’t get spooked. I don’t even watch scary movies at all because I get unnerved pretty easily.

⁃ Are you scared of hillbillies?
hahaha. does Rob Ford count? I so, yes…

⁃ Does that hillbilly even realize that he can’t kill someone who’s already dead?
I think he is blinded by his bitter rage. I’m sure he could also use a few days in a public school to help understand the concept of shooting an item with mass into something without mass, but schooling isn’t always an option for a farmer who specializes in the moonshine business.

⁃ Do all hillbillies like moonshine?
I think so. Do you remember Uncle Jesse’s moonshine factory out back of the Dukes house? That’s really my only other hillbilly reference point, so i will have to say yes.

⁃ What did that hillbilly ever do to that ghost to deserve such torment?
It must be a lonely life ( or un-life ) being a ghost, and he really just wants to just have a good time. Maybe if the hillbilly spent some time pushing him on the swing set, or throwing a Frisbee back and forth, the ghost wouldn’t need to play with his precious moonshine so much.

⁃ Why did you decide to go with webisodes instead of pitching to broadcasters?
I just wanted to do something that would be easy on myself to create.
I’ve made these on the side while working full time, so i think anything other than extremely limited animation in this sort of format would be just be too intimidating to attempt to tackle in my spare time.
Ideally, I would of loved to put more into them to make them shine, but in hindsight, I feel like they kinda work as an obtainable alternative to higher quality animation for a single person production, which happens to fit nicely into the internet animation formula.

⁃ Will we be seeing Cuddle Sticks make a cameo in County Ghost?
haha,  County Ghost is aimed at children, so I think I may keep those as separate as possible. I always worry that a child is going to watch some episodes on YouTube and then end up my channel for more. It`s unfortunately not something that I can control, but have awoke in a few cold sweats thinking about the poor parent that has to explain to his 7 year old what was going on in that cartoon.

⁃ Whose work influences you the most when making County Ghost?
Animation style wise, definitely Roger Ramjet had some influence, in fact, the majority of the “fill the screen with a flash effects so you don’t have to animate anything“  were taken from that show. Artistically, at the time my friend Hobo Divine was helping me a lot with drawing theories and his input really helped me out a lot. Thanks Hobo.

⁃ Where can we find MORE County Ghost?
I actually ended up with an agreement for the first 4 episodes with a company that represents online content. I’m hopeful that the company that holds the rights will eventually want to produce more, but in the mean time, although I have some ideas ready to go , its really just a waiting game to see if the series can gain some traction in the internet animation world.

Mike has also GENEROUSLY DONATED PRIZES! READ BELOW ON HOW TO WIN! (contest now closed! Sorry!) But first you must marvel at some artwork:

That’s right, the FIRST TWO PEOPLE TO COMMENT BELOW will win a ‘County Ghost’ AND a ‘Cuddle Sticks’ DVD!!

AND – The NEXT THREE COMMENTERS (comments 3-5) will win ‘County Ghost’ DVDs!!