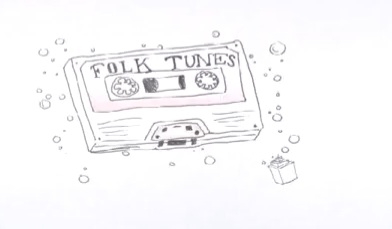 This is from Quickdraw Animation Society’s ‘Jampede’ back in 2005 – multiple artists jamming on animation. Everything is as it should be.

Quickdraw Animation Society is one of Canada’s longest-running artist-run non-profit centers for animation, and is located in Calgary, Alberta. Chris Robinson (curator of the Ottawa International Animation Festival) has a great write-up on the origins of QAS over HERE. The current QAS has come a long ways, managed to survive and kept pace with the times, and now has a media kit which you can access on their site. In it you’ll see Canada’s former Governor General, Michaëlle Jean, taking a tour and meeting the resident artists.

QAS was my very first exposure to animation at the age of 18 after I had dropped out of Alberta College of Art & Design in 1994. To this day, it has the HUGEST library of animated films I have seen outside of the NFB – over 3,000 films from all over the world. What I learned at their night courses in animation taught by then-instructor Kevin D.A. Kurytnik left me well-armed for the Sheridan curriculum, and was actually BETTER than Sheridan’s was in 1995, in my opinion.

We’ll be featuring more from this eclectic group next Thursday, Oct. 7. They are really vibrant and busy. Stay tuned!