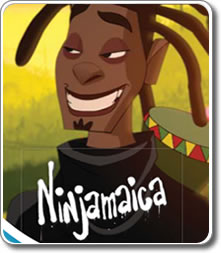 Our old pal Cameron Archer has been keeping up with the recent airings of the Teletoon Detour pilots commissioned a few years back.  This past Sunday was Ninjamaica’s debut.  Cameron watched it, and didn’t hate it.  Here’s a bit of what he had to say:

Ninjamaica has, taken at face value, a stupid premise.

He’s an amnesiac ninja from Jamaica, and sings for a reggae band.

Ninjamaica embraces its own ludicrousness.

Ninjamaica is a nice surprise for me.  It doesn’t take itself seriously, and its negatives can be fixed over time.

If nothing else, Ninjamaica has one hell of a theme song.  That alone makes it better than The Dating Guy.

His full review is here.

I didn’t like Ninjamaica.  It was certainly at the top end of the mediocrity scale, but I wouldn’t go beyond that.

The tow best shows have already aired, Angora Napkin and Duncebucket, so I don’t know if I’ll be tuning in for any more.

Also, has anyone else noticed that the travesty that was Wireless Family doesn’t seem to be on the schedule?