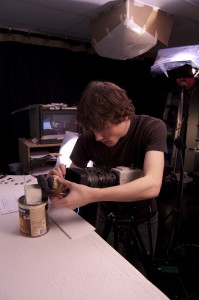 Last week I posted a fantastic film in the showcase, the Arctic Circle,  by Toronto’s Kevin Parry.  Months back, Kevin was good enough to take some time to chat with me about himself and the film.  Not long after,   I had one of what amounted to three major system crashes over the course of twelve months and believed the interview to be lost to the ages. A short time ago, during some digital housecleaning, I came across most of the original copy of our  conversation.  Alot has happened in Kevin’s life since we had our chat, but I’ll get to that in the next post.  For now, apologies to Kevin, and here you go:

MV: I’m good, been really busy, but settling down a bit, what about you?

KP: Thanks, means a lot when people say that

KP: It took a huge amount of work to get that story the way it is.  I cleaned out 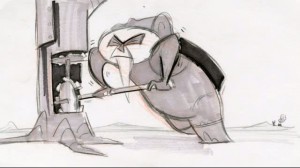 my desk the other day and threw out a pile of boards about a foot high. Unused boards, I should say.

MV: well, let’s talk about that a bit, how did this project start for you?

KP: It all started with me coming up with visuals that would accompany music.

My composer had released an ambient rock album a couple of years ago, and I thought it would be perfect to make visuals for.  So I started thinking up ideas while listening to the tracks, and the first pieces of my film came together that way.

I actually was planning on using the music up until about October of last year, but realized it was too much for a short film, and got him to compose an original score.

MV: so the music that inspired the film wasn’t what you ended up using?

KP:  That’s correct, but it played a HUGE role in figuring out my film.  There was a lot of times when I felt like I had lost control of what I was doing, so I would just listen to the tracks and try to visualize a clear idea in my head of what I wanted to do.

I think I actually paced my film to the music that inspired it, though, kind of like a temp track.  And that was the ground work for the pacing.

MV: so you started with the music, where did you go from there? and what kind of time frame are we talking?

KP: I think I actually started brainstorming the visuals several years ago, maybe three.  One thing that’s always been there was the orange colour, light, stuff (whatever it is).

MV: yeah, how did that happen?  I was looking through your blog, and all of sudden: stop-motion!

KP: Yeah that was weird, haha.  In third year of our program, we have a stop-motion class thanks to Chris Walsh.  I have a huge passion for problem solving and figuring things out, no matter what I’m doing, so I think I was naturally drawn to the process of approaching a physical object and moving it frame by frame to tell a story, if that makes sense.Also, I’m really tough on myself, and I knew that I was more passionate about animating, then drawing itself, so I felt I wasn’t going to make a name for myself as a drawing artist any time soon.  And I felt really drawn to stop-motion, so I figured, why not?

MV: Cool.  Had you had any previous experience with the technique? 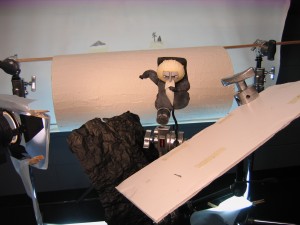 KP:  Not really.  I had always loved building models and stuff like that as a kid, so that might be an indirect experience.  But essentially, I think I owe my life to Chris Walsh.  He’s really pioneered stop-motion within Sheridan and I think that outlet for the several students that go that route is completely worth it.

MV: And now that you’ve found stop-motion, what do you plan to do with it?  Are you seeing work opportunities?

KP:  I’m really passionate about animation in general.  I think I thrive in stop-motion, and would love to stick with it, but not to the point that I want to shut any other doors.  And I am seeing opportunities, yes, but I don’t want to talk specifically about any companies, etc.

Let’s go back a bit:  early influences, what lead you to animation?

KP:  This is where it gets confusing to me.  I didn’t really decide to go into animation until very close to when I applied to Sheridan.  I liked the idea of being a film maker, and I was fairly savvy with computers, so I figured I’d try and be an animator.

I really think it was the challenge that brought me here.  I was actually the valedictorian of my high school and had pretty much aced any math or science I’d taken, so I had a handful of options with what I wanted to do.  I wanted to be an architect at the same time as applying to Sheridan, and got into every university I applied to, but Sheridan Animation turned me down.

I think that was the moment I decided I wanted to be an animator, when someone told me I wasn’t talented enough to be one.

KP:  Oh, I was.  I did a lot of sketching and drawing, not so much characters or comics, though.  I really enjoyed drawing realistic portraits and things like that.

Don’t get me wrong, art/drawing was a huge passion.  I think I’m really driven by the passion to do whatever I’m doing the best I can.  I’ve always hated not understanding things, so if I’m given something to do, I really need to figure out every aspect of it.  I guess I should talk about specific influences though, right?

KP:  This probably sounds weird, but I think my biggest influence was David Copperfield, the magician. 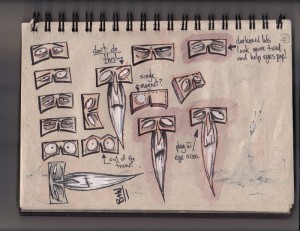 KP: I was really passionate about magic as a kid (and still am).  There’s this huge link between magicians and film makers.  I love the idea of putting something right under someone’s nose and having them not being able to understand how it’s happening.

Maybe that’s what draws me to stop-motion, there’s a big respect for doing things practically, and not in a computer.  Not to put down computers, they are wonderful tools.

MV: sure, and you did make some use of them in your film, right?

KP: I did a lot of compositing and computer work, yes.  But, my goal was to make my film look like it was made pre-computer era.  That was extremely important to me.

MV: I think you were very successful on that one.

KP: Thanks!  I had a lot of people suggesting how I could make the arm glow more intense, or add certain filters, etc., but I had to restrain myself from over digitizing it.

With the glow, I specifically wanted it to look like it was hand painted.  Kind of like old movies with witches and magic, where you can tell the the bursts from their wands are hand drawn effects. 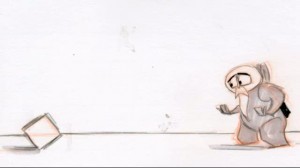 MV: and yet, none of it felt “retro”.  It had a great aesthetic; spare, economical.  It really matched the story.

KP: Economical is a good term.  I knew I wanted to focus on character animation, so I left the extensive sets and props for another day.

MV: Economy is half the battle in film-making, make the film you CAN make.

And at the same time, I really wanted to push myself in terms of what I could cheat.  It was a big part of my film to trick the audience into thinking there was some endless arctic surrounding the story

KP: Well, as we all know, the horizon needs to match the height of the camera.  So I needed a way to make the back of my set able to cheat this, to look like it recedes into the distance.  So what I did was have this flap at the back, draped over a wooden dowel that I could raise or lower to match the back of the set to the visual horizon on camera. 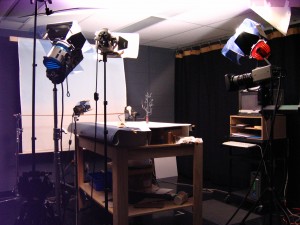 The whole thing was made out of an old vinyl curtain and rod that I found in my apartment, and little paper mountains I had printed out, that I would tape on.

I could sit for an hour an point out all the cheats that no one will ever notice, some are hilarious

MV: It sounds like a big part of your motivation in this animation thing is really to be a storyteller, a filmaker.  Do you have any idea how to go that way, as you leave school and look at entering an industry that’s basically service-based?

KP: Well I’m just really passionate about the entire film process in general, and feel happy wherever I’m placed or what I’m doing.  I’ve been able to work odd jobs on live-action sets as well as animation and it really doesn’t matter to me what I’m doing. I really want to pursue animating, but as long I’m part of the team, I’m happy.  I’m young and optimistic.

KP: haha, I was waiting for that

MV: yeah, it’s a standard response to idealism that we all get about a year or so into this business, but don’t worry, on some of us, it grows back.

MV: So, you’re out of school now, a film under your belt, you’re entering the work force.  Times are busy for you.

Are you looking at a next film?

KP: I actually am, something a bit more organic though, not as narrative driven

MV: will this be stop motion as well?

KP: Yeah, I have an idea to do some live-action/stop-mo combination.  I guess I should say that Norman McLaren is a huge influence as well.  I want to try something kind of in the vein of his work.

MV: cool!  Have you ever used a Bolex?

KP: I would love to!  My brother is in film actually and has a beautiful 16mm bolex in the room next to me, but I’ve never had the time to try it.  I have an old 8mm that can shoot 1fps, and I’d love to attempt something.  Well, not really 1fps, but one frame per click, you know what I mean.

MV:  you need to try it out,  it’s fun.  I used one at Concordia many moons ago.

KP:  I shot my film on these old JVC cameras and an old linear computer system. 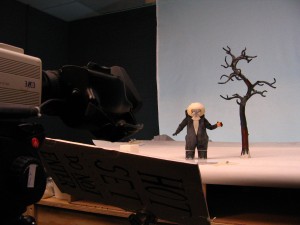 It was great not to have an undo button

MV: That’s it!  Same with the Bolex.  No playback, just point and shoot, and hope for the best

KP: Yeah, that’s the next level I suppose.  I really respect that approach.

And that’s where Kevin and I left off a few months back.  Since then, he’s been updating his blog as his film has been doing the festival circuit, and he’s promised us an update on that experience.

In the meantime, he’s written a bit about the unique opportunity to present his film to Tim Burton, in conjunction with his exhibit in Toronto.  We’ll have that in the next installment.

Published in Profiles and Uncategorized