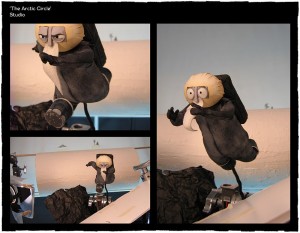 Kevin Parry, recent Sheridan Grad and one of this site’s favourite animators, managed to wrangle Tim Burton’s on the spot review of his student film ‘Arctic Circle’ at the TIFF Bell Lightbox on the opening weekend of Tim Burton’s exhibit. Talk about a once in a lifetime chance! They also get into the nature and future of stop-motion animation.

“The event was part of TIFF Bell Lightbox’s Higher Learning program. Within the span of a day or so I found out the event was taking place, then received word I may be part of it, and then got the confirmation (it was a wild ride). The event took place Tuesday, I found out the Thursday/Friday all the details. I essentially spent the weekend knowing that I would have to meet, screen my film for, and maintain a discussion with Tim Burton in front of several hundred people and fighting off panic attacks. NOT that I’m complaining, but it was nerve-racking to say the least.

For each of the films screened, we had to go up on stage, meet Tim, watch our film, and then return to the stage to get his reaction and ask a few questions. We had been prepared to have questions ready and I was able to ask about stop-motion slickness and how Tim decides between animation and live-action when approaching a project.”

Hats off to Kevin and the other filmmakers!