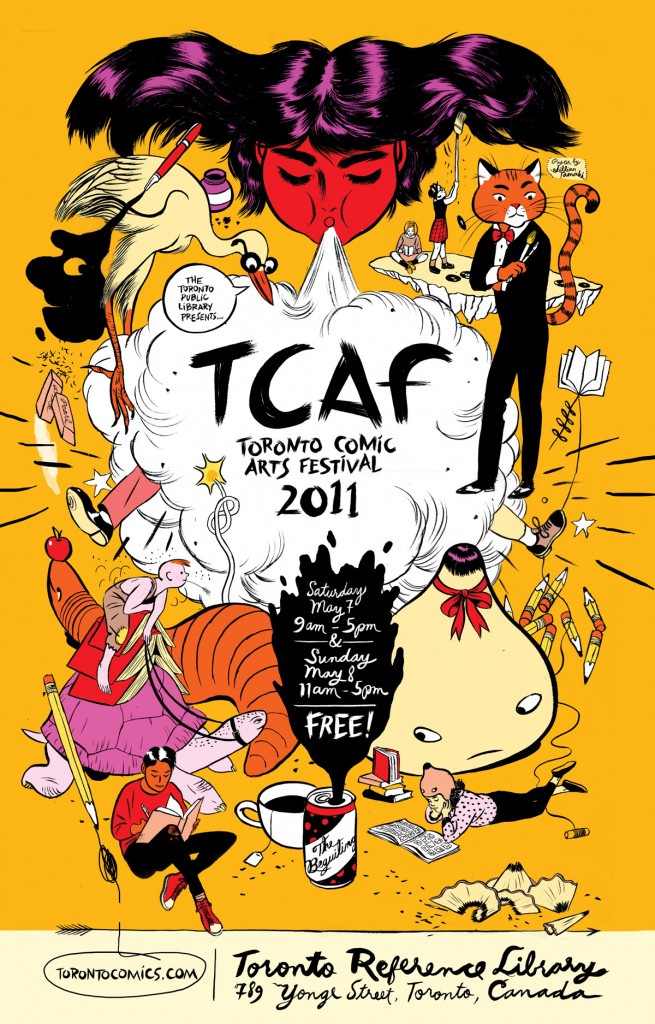 TORONTO, Ontario – Returning for the third time to Toronto Reference Library and for its 8th year overall, The Toronto Comic Arts Festival (TCAF) will burst onto Toronto‚s literary and comic scenes again this May with its biggest and best show yet. With over 250 cartoonists from around the world expected to exhibit, the broadest and most exciting range of comics and graphic novels being published today will be on display in one of the foremost events of its type in North America this May 7 and 8, 2011.

Headline guest Chester Brown is one of Canada’s most famous authors and his large body of work including The Little Man, I Never Liked You, The Playboy, Ed The Happy Clown, the seminal underground comics series‚ Yummy Fur and Underwater and the best-selling Ecomic strip memoir‚ Louis Riel are renowned worldwide. That impressive body of work will be joined in 2011 by Chester’s brand new graphic novel Paying For It, which makes its international debut at TCAF. An exploration of sexual mores and personal politics many years in the making, Paying For It will be one of the most talked-about Canadian books of 2011, and Chester will be launching the book, discussing it in readings and panel discussions, and signing copies for fans over the course of the Festival.

Chester joins a fantastic and diverse array of cartoonists from around the world that will exhibit at TCAF, including the artists of the Offical 2011 TCAF Poster Jillian Tamaki (Skim), German cartoonist, teacher and multimedia artist Mawil (We Can Still Be Friends), and the superlative Chris Ware (Acme Novelty Library). They’ll be part of an ambitious programme of exhibitor presentations, gallery showings, readings, lectures, workshops, discussion panels, and an artists‚ marketplace that brings the medium of comics, comix, graphic novels˜whatever you want to call them˜to life!

Settling into an annual date on the first weekend in May, TCAF 2011 will follow our most successful event ever in 2010, which saw over 12,000 people attend The Toronto Reference Library exhibitions over two days, and over 15,000 people attend various Festival events in total. TCAF 2011 will be the largest ever, incorporating additional space for a large-scale art show featuring German cartoonists produced by The Goethe-Institut. The Bram and Bluma Appel Salon at Toronto Reference Library will host a gala kick-off presentation of the Festival, and the 2011 Doug Wright Awards for Excellence in Canadian Cartooning.

– and all the way from New Zealand, creators Becky Dreistadt and Frank Gibson (Tiny Kitten Teeth).

Over the next several months TCAF will announce additional featured guests from Canada, Japan, France, and Italy, and related events, including details about the official kick-off event Friday, May 6, and the details surrounding the Goethe-Institut exhibit and The Doug Wright Awards. For more information visit the TCAF website regularly: http://torontocomics.com.