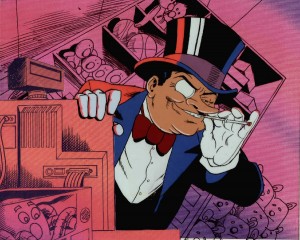 In the 80s, the Zellers chain commissioned some cool commercials of the Batman and his supporting cast. I remember them fondly. Animated in Toronto by animation veteran Greg Duffell’s studio Lightbox Studios, Inc, I had a chance to ask him a bit about these spots. An excerpt from our email exchange:

“…they were done 23 years ago. We all worked hard on those films and the
budget was super low too. I think they were all made for $100,000, which
might seem high by Korean standards.”

And from the comment section below, from Greg Duffell himself:

“Credits on the four commercials:

No wonder Bruce Timm & WB contracted Lightbox to produce a trailer for a new show they were attempting to get off the ground. It was a totally different look than these spots, same subject matter, but darker in tone. You might remember the end result of that pitch as ‘Batman: The Animated Series’.

Check out some cels from the spots HERE. It’s interesting to note how the drawings were obviously designed for exaggeration as they would have been viewed in full motion, not held cels.