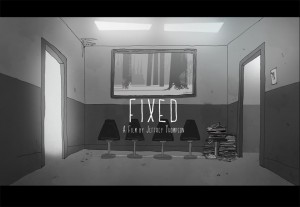 I caught this film at the Sheridan student screening last year in 2010, and it stood out. Turns out it was Jeffrey Thompson’s thesis film, and I wound up working alongside him at Toronto’s House of Cool. Funny guy full of stories, and his film ‘Fixed’ is but one of many. He was even kind enough to answer our patented ‘8 Second Exposure’:

2) Where ya from?
Born and raised Toronto Ontario.

3) Where did the idea for this film come from?
The idea stemmed from a three year hiatus I took from animation school due to health issues. Many of the moments in my film depict frustrations I had with the Health care system in Canada.

4) What governed your choice of media for it? What did you end up using?
I used both pencil and ink for my initial designs and Layouts, but moved to digital programs like Flash, and Photoshop to achieve the final look.

5) Whatcha doin for money?
Currently I work as a visual development artist and am in studio at House of Cool in Toronto.

7) Future plans?
To grow as a designer and artist within animation, and eventually move into feature film. Living in close proximity to a great coffee shop would also be nice.

8 ) If you were a clone who met your original, what would you say to him?
Fat, drunk, and stupid is no way to go through life, son.

Oscars, schmoscars. We got your short films right here, pal. If readers know of an animation artist posting great films online, drop us a line and we’ll drop our patented 8 Second Exposure – on them.