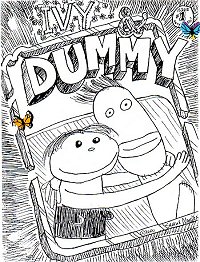 Here’s a great little short based on the mini-comics by Ottawa artist Suzanne Marsden.  It was made by Geoff Marshall for Decode Entertainment.  I’ve asked Sue to share some background on the short, so check back in later for an update.

Ivy And Dummy from Geoff Marshall on Vimeo.

Here’s what Sue had to share about the background, and possible future of Ivy & Dummy:

Wayy back in 2000 I was working on Graham Falk’s lovely ‘Untalkative Bunny’ and was having a great time working on ‘boards with Mik Casey and a bunch of other great people.
I loved the style and enjoyed the simplistic designs that were so great at conveying emotion (how does that work? Lord knows 🙂 Another stylistic influence was the fact that I was reading a truck-load of Leanne Franson’s lovely mini-comics “Liliane” at the time as well.
Not long after that, I got some new pens and some beer. I combined the two, along with my bizarre imagination and Thrive’s album “Revenge” to create “Ivy & Dummy”. Initially, the comic was drawn in ink on lined paper with crazy use of white-out for all my boo-boos. Eventually I scanned it and cleaned it up in PhotoShop, then laid it out by hand to turn it into a small mini-comic. The impetus to get that done was Canzine 2000 in Toronto, which I attended with T. Anders Carson in the fall. The original print-run was fifty and they were a freebie if folks bought my black & white anthology “Abraxia’s Dream“. Each “Ivy & Dummy” comic had an insane activity page on the inside cover and came with free smiley stickers.
A few years later, I was pitching ideas to Decode Entertainment (now DHX Media) and brought a pile of material with me, including my ‘aBraxIa‘ comics and “Ivy & Dummy”. Beth Stevenson, the lovely lady in charge of development, who is now head of the new Brain Power Studio in Newmarket, jumped all over the mini and said that she wanted to try and do something with it. Decode also were great and picked up a few more of my ideas to work on and I’ve enjoyed a great relationship with Ms. Stevenson since (I am currently working as a writer/ design artist at Brain Power!)
“Ivy & Dummy”, although sweet, gentle and innocent, was sort of a tough sell. It was an odd-ball story of a girl and her dummy. “Broken Pencil” gave it a nice review (http://www.brokenpencil.com/view.php?id=2323) , and other folks loved the concept…and just as many folks didn’t like it or didn’t understand it. Or they found it unsettling that an adult woman would drag a stuffed man around and talk to him. People who initially had been interested in “I & D” got switched out from network positions and some of the new people just didn’t get it. At that point in time Decode had commissioned Geoff Marshall at Chromacide to do a short to shop around at some cons. The idea was that “Ivy & Dummy”, if not suitable for television, might be appealing as an online or cell-phone application/comic.
I had a ball turning my mini into a bonafide script, doing ‘boards for it, doing layouts (one of the layouts involving the bus driving into scene was massive–the biggest layout I’d ever drawn). I had a huge amount of input on the project, which was delightful. Geoff was awesome editing the bulk of stuff down and making it a nice, tight short. It was remarkable to me as well, that of all the comic-related things I’d ever worked on, that “Ivy & Dummy” which had only ever been kind of a silly romantic mini-comic ended up making me more money than all of my other stuff combined.
Eventually, time lapsed and “ivy & Dummy” returned to my hands (in a legal sort of way). It was shelved for a bit, but never forgotten. Since Brain Power Studio’s launch in June 2010, the mini-comic has been circulating around the studio once more and interest has been drummed up, thanks to Beth Stevenson’s continued belief and love of the characters and story. “Ivy and Burris” (renamed!) should rise phoenix-like over the next little while to return to generate some kind of web-related attention, probably involving one-panel gag comics, and salable products (a la Simon’s Cat) with luck!
Thanks Sue!