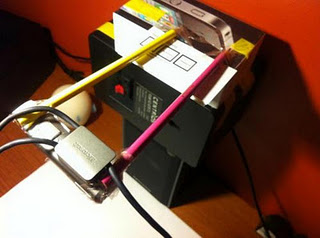 Rebecca David just posted an update on the 30 Second Films blog.  The above photo is her home-made line test machine.

The Challenge is entering a new phase.  Technically, we failed miserably.  No one hit the deadline, none of the films are finished, the licenses that Toon Boom gave us expired.  Total film fail.  So what we’re looking at now is basically 30 Second Film Challenge 2.0.

I put it back in the hands of the film makers.  They’re lives have changed since we started the project.  Most of them have new jobs, some have new homes, their schedules have changed and they have new responsibilities.  Heck, for that matter, my life has changed too.  I’ve got a new job, and I’ve moved from Ottawa to Toronto, so I’m not around to ride them on a regular basis anymore.  The amazing thing is that they still want to complete their films, and they’re still working to do so.

I had each group put together a new production schedule, realistically setting goals and benchmarks.  They’re now meeting once a week without me as well, and we were able to get ToonBoom back on board for an extension of the licenses.  They’ve been awesome, by the way.  Big thanks to ToonBoom.

So we’re still at it.  The longest schedule looks like about 10 weeks.  So I’m hoping to have the films available online early in the new year.  I’m also trying to get the participants to blog a little more about the experience.  We’ll see how that goes.