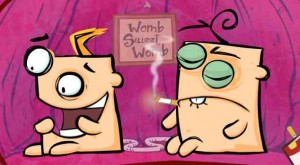 The series follows the relationship between polar opposite twin brothers, Goodwin (the good twin) and Badwin (the bad twin) from their stint as womb mates to the politically incorrect and surreal adventures they share growing up in the world around them. The show was created in association and made possible by Flinch Studios and Loogaroo. The series will be distributed by Mondo Media, the largest distributor of online animation for teens and young adults, and the first of six, 2-3 minute episodes that will be available on YouTube starting on January 18th, 2012.

“We are all really excited about partnering with Mondo Media. We believe that Mondo’s unique ability to create and distribute compelling animated comedy has made them a one stop shop for the ever-growing teen and young adult audience that consumes web content,” says co-creator Joshua Bowen.

“We’re always on the hunt for the hottest, new animated comedy to share with our YouTube subscribers, who are nearly a million strong,” says Aaron Simpson, Mondo Media’s VP of Development. “Goodwin vs. Badwin has that blend of hysterical writing mixed with strong production values that we look for, and we’re very excited to be able to host the premiere of this series.”

While many producers may have trouble justifying the financial realities of a web based business model, co-creator Joshua Bowen believes that now, more than ever, is the best time to produce adult animated web series like, “Goodwin vs. Badwin.” Co-creator Peter Burton notes that, “the great thing about the digital space is that there are few barriers to entry making the medium more accessible than conventional broadcast platforms.”