press release: YTV and Cartoon Network on board for season 3 of Almost Naked Animals 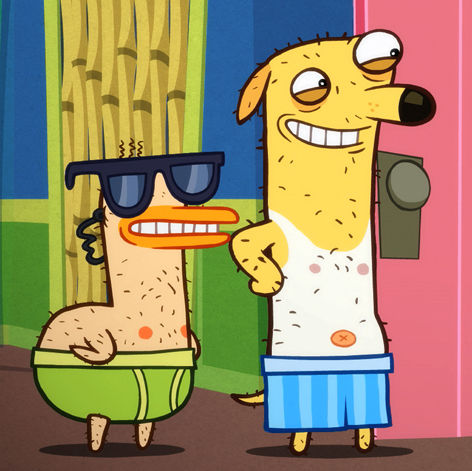 Almost Naked Animals (52×22), produced and distributed by 9 Story, launched on YTV Canada in January 2011, on CiTV UK in April and ABC
Australia in May. The series had its US premiere on Cartoon Network in June, and was quickly picked as one of People Magazine’s top children’s
shows to watch.  The series also recently launched on Canal+ France, Disney Channel in Italy and Latin America, NPO in the Netherlands and
Super RTL Germany.  In November, Almost Naked Animals hit the #1 series on CiTV.

“We couldn’t be happier with the success of Almost Naked Animals and the tremendous support it has received from YTV from the very beginning,”
said Vince Commisso, President & CEO, 9 Story Entertainment.  “It’s gratifying to see the momentum building behind both the show and the
licensing of the brand.”

Almost Naked Animals is a joyously irreverent comedy series, featuring an oddly lovable assortment of free-spirited animals in their underwear,
who run a beach-front hotel like kids at a summer camp – doing their best to make each day crazier than the last. Lead dog and hotel manager
Howie, who has the attention span of an 11 year old in a video arcade, heads the dysfunctional ensemble cast.  The series is based on the
quirky designs of Noah Z. Jones, creator of the top-rated Disney Channel series Fish Hooks.

9 Story Entertainment is one of the industry’s leading creators, producers and distributors of award-winning animated and live-action
content for young audiences around the world.  With an animation studio based in Toronto, 9 Story has over 200 creative and production staff,
and has produced over 500 half hours of quality children’s and family programming, seen on some of the most respected children’s channels
around the world across multiple platforms.  The company’s distribution arm 9 Story Enterprises represents a growing catalogue which includes
several beloved brands such as Peep and the Big Wide World, Wibbly Pig, Harriet the Spy: Blog Wars and Wild Kratts in addition to popular new
series such as Almost Naked Animals and Survive This. Their much-anticipated new shows include the delightful Daniel Tiger’s
Neighborhood. www.9story.com <http://www.9story.com/>