a conversation about unpaid internships 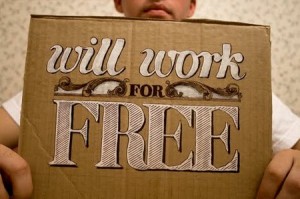 A few days ago, we posted openings at Toronto’s guru studios for unpaid internships in various positions.  We received an above average number of comments in response to those posts.
First of all, thank you for your response.  We get next to no discussion in our comments section.  That’s our norm.  We also recently had a small outbreak of poorly-worded, overly negative comments that had to be removed, something I don’t like to do.  The reaction to the guru posts were generally well thought out, intelligent criticism.  A few veered into extremes, but for the most part, the reaction was balanced and considered, and some even showed support for guru’s long history as a fair, friendly employer.  This is something I want to be clear about before progressing as well.  I’ve never worked directly for guru, but I know a few people who have and have spoken very highly of their experience.  I’ve met Mary Bredin on a few occasions, and I’ve found her to be approachable, kind and intelligent.  I received communication from guru yesterday, asking for the posts to be removed, as the positions have been filled.  I offered them the opportunity to address the comments, and they have assured me that a response is on its way.
But  a few points were raised that should be addressed.  The primary concern is that, in the wording of the posts, it appeared that guru would be taking on unpaid interns to participate in the production of one of their series contracts. Specifically, the following: “looking for Animation Interns to assist with the second season of our internationally broadcast show, Justin Time”  That seems pretty straightforward.  In fact, under responsibilities, it even states: Assist animation team to meet the needs of the production.  So really, there’s no confusion there.  For whatever reason, guru was clearly looking for unpaid interns to work on Justin Time.
This angered many members of our animation community.  Some reacted viscerally, but others were more constructive, pointing out specifically:

Unpaid internships are fine, but only if you are being mentored in-studio and do not touch any of the productions. The moment you do work for even a single shot, they must remunerate you for your time.

And the following allegation appeared:

The topic of unpaid internships is one that comes up fairly often.  Cartoon Brew posted on it last year, and their position on it is right in the headline: Most Unpaid Internships Are Illegal.  The post garnered much commentary, some inflammatory, some considered.  What I didn’t see in it was factual support for their statement.  But if you click through to the source of the discussion, a New York Times article on the rise of unpaid internships and subsequent government crackdown, you’ll see that our American cousins have some pretty concrete rules about what constitutes an internship.  They quote a few basic parameters: “Among those criteria are that the internship should be similar to the training given in a vocational school or academic institution, that the intern does not displace regular paid workers and that the employer “derives no immediate advantage” from the intern’s activities — in other words, it’s largely a benevolent contribution to the intern.” So they’re saying that interns need to be getting training, like they would in school, not be doing work that would otherwise go to a paid worker, and that the employer isn’t really getting anything concrete in return.  Ok, that seems pretty straightforward, and also sounds like bad news for guru. But guess what?  After a phone call with a representative from the Ontario Ministry of Labour, it appears that we don’t have any legislation that addresses this in so direct a fashion.

It looks like the issue is in the question itself.  We’re asking if these interns should be getting paid for their work or not.  But therein lies the conundrum.  Because they’re not getting paid, they’re not technically employees, and therefore, not covered under the employment standards act.  They’re volunteers, pure and simple.  The act itself is available online, and if anyone can find more relevant info in there, please share.  There is another document, however, that’s not available online.  It’s the Policy and Interpretation Manual.  The guy I got on the phone was good enough to put me on hold and do some reading.  Here’s what we arrived at.

The first key part to the volunteer situation is what is termed  “Initiation”.  Basically, as long as both parties are cool with the arrangement, and the terms are clear at the start, then no one’s doing wrong by anybody.

The next part is where it gets interesting though, “control”.  This is a volunteer situation, and has to remain as such.  The moment the company in question begins to exert control over the volunteer, such as mandatory work hours, the relationship is altered.  Behaviour must remain reflective of volunteer status, not employee status.  If the volunteer doesn’t show up, or doesn’t complete an assignment, and is penalized for it, such as dismissal, the company in question could then be on the hook for past wages due the volunteer for contributions they have made up til that point.

It’s all very nebulous and grey, and really, as long as the company in question maintains a very specific language in dealing with the volunteer, then no one’s breaking any laws. 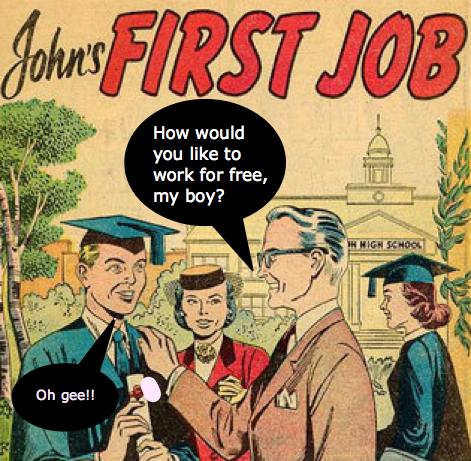