Here it is, this year’s poster for the Ottawa International Animation Festival.  These things always seem to spark controversy. 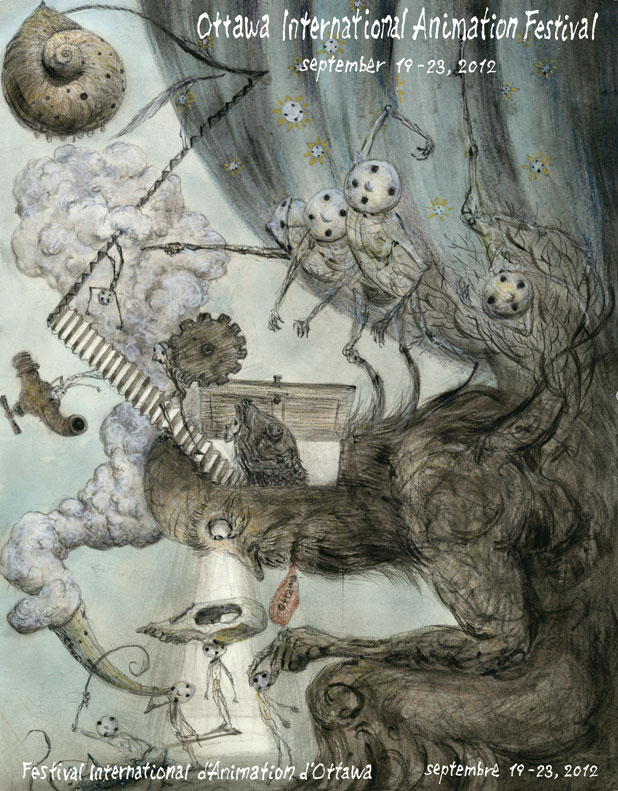 Here’s the info that accompanied the release:

Each year, the Ottawa International Animation Festival commissions an artist to design our Festival poster. The Festival grants the artist free reign  and encourages the design of unique and provocative works of art.

Celebrated Japanese animator, Koji Yamamura, designed the poster for Ottawa 2012. Yamamura’s name will be familiar to regular festival attendees, as his work has already been featured in competition at Ottawa, most notably taking home the 2007 Grand Prize for his animated short A Country Doctor.

“Drawing a poster for Ottawa12 is a great honour for me,” said Yamamura.

“This image was made from an unused sketch from Muybridge’s Strings. This sketch was the basis for the creation of the character Zeno, who is thinking about the infinite split of time”

Born in Nagoya, Japan in 1964, Yamamura began his animation career at an early age, creating his first film at just 13 years old. After graduating from his painting studies at Tokyo Zokei, he took a job as an animation background artist at Mukuno studio. He then left the studio to pursue freelance work, eventually founding his own company, Yamamura Animation, Inc. with his wife in 1993.

Throughout his career, Yamamura has created works of art that deny pigeonholing. His creation of unique images, where trees grow out of heads or fish fly under rain, ignite the imaginations of viewers across the globe.

Over the past decade, Yamamura’s work has been critically acclaimed around the world. His 2002 animated short Mount Head was nominated for an Oscar and won top prizes at major animation festivals around the world including Annecy in 2003 and Zagreb and Hiroshima in 2004.

In 2011, Yamamura released Muybridge’s Strings, co-produced with the National Film Board of Canada, which was featured in competition at Ottawa 11. The film won several awards in Japan, Europe and North America.

Currently, Yamamura is actively involved in the Japanese Animation community. He sits on the board of directors of the Japanese branch of the International Animated Film Association (ASIFA) and is also helping to develop the next generation of Japanese animators teaching at his old alma matter, Tokyo Zokei University since 2004 and at the Graduate School of Film and New Media, Tokyo University of the Arts since 2008.