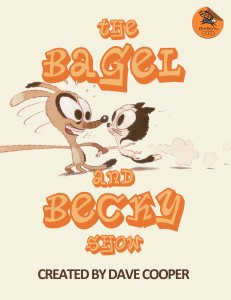 Toronto, Canada – March 29, 2012 – TELETOON and Radical Sheep Productions have entered into a development deal for an animated comedy based on the book Bagel’s Lucky Hat by the world-renowned fine artist Dave Cooper (a.k.a. Hector Mumbly).

The Bagel and Becky Show is an 11-minute comedy for kids 8-11 about Bagel and Becky, a brother and sister who just happen to be a dog and a cat, who leave the house each day and usually end up any place other than the spot they were headed to. For them, the shortest distance between A and B also include points Q, BBB, a gassy pogo stick and a goo fight in 3,000,000,000 BC.

“Just like Dave Cooper, The Bagel and Becky Show is a true original: his brand of surrealism and wonderful illustrations are the perfect fit for TELETOON … where anything can happen,” said Alan Gregg, Director, Original Content. “This will also be our first time working with Radical Sheep and we couldn’t be more excited.”