from the internets: Meet the cartoonists behind Cartoon Network’s hottest shows, c/o the Beat

Heidi MacDonald’s long-running comics blog, the Beat, is currently running a series of articles featuring the cartoonists behind Adventure Time, the Regular Show and Problem Solverz.  The pieces showcase the crossover of current talent working on these shows from indie comix to animation.  It’s a good read, and shows the impact having the right talent on the right show can really have.  I’m a big proponent of animators making comix and exercising their storytelling skills in a medium that’s so immediate.  It’s a great way to develop a voice, and apparently, can get you hired to work on Adventure Time.  And look how many get credit s writers!

How did you come to work on Adventure Time?

I met Pen Ward at the Small Press Expo in Maryland a couple of years back. He was hanging out with a lot of different cartoonists and doing jam comics. I thought he was brilliant and really cool. He liked some of the comics that I was doing and asked me to do a story-boarding test for him. I was stubborn and didn’t want to move to Los Angeles back then. Now I’m doing freelance from Toronto.

Animation has for sure helped me with character posing, expressions and visual communication in general. Also end up treating my comics like storyboards sometimes; lots of characters moving through static “shots.” I think in turn my story-boarding is more illustrative than it was before I did comics.

What comics have you made in the past?

Cat Rackham comics, mostly! He’s a depressed cat who lives in the woods and wears a t-shirt: http://catrackham.com/ I just published “Cat Rackham Loses It!” with Koyama Press in Toronto. http://koyamapress.com/ 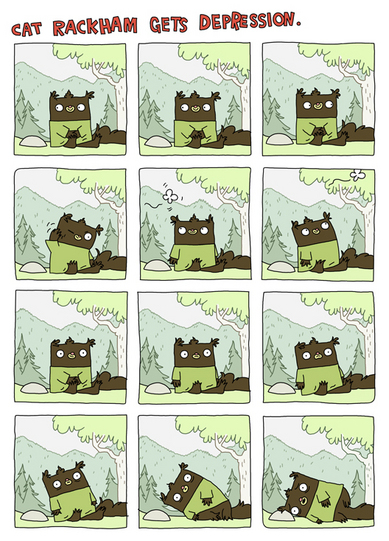 What comics are you working on right now?

Part one is here.  Part two is here.