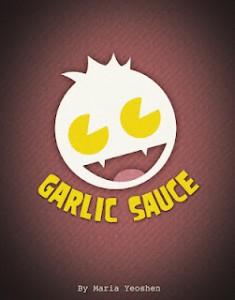 I had the chance to pop in at the Open House at Ottawa’s Algonquin College a week or two ago, and once again, I was surprised by the overall quality of the films.  Algonquin’s program has been steadily building a strong reputation, and in the past few years, the overall quality of the gradfilms has been increasing.  Last year was particularly strong, with less standout films and a stronger broad base of quality.  I was a bit hesitant this year, unsure of whether or not they’d repeat and we could actually look upon this as a trend, as opposed to just a good batch of students.  Well, I’m happy to report that they pulled it off.  Once again, a strong showing with a nice crop of completed films and a solid base level for overall quality.  I’ll do my best to share a few of the films her over the next little while.

Today I’ve got Garlic Sauce, by Maria Yeoshen.  I’m familiar with Maria’s work, and you’ll see some of her real strength in the character animation for the little “Garlic Vampire”.  She has a terrific grasp of old school cartoon acting, and it doesn’t quite come through here, but you get glimpses.  A solid first film.  Maria mentions on her blog that she’d like to make another short, and I’m really hoping she does.  I think she has real talent, and this little film barely scratches the surface of it.