(Banff, AB, June 12, 2012) – The Canadian animation world is about to gain one pair of cosmic power pants and a trio of insane animals. TELETOON Canada Inc. today announced its latest original production slate featuring kids comedies Dr. Dimensionpants and Endangered Species as well as fresh seasons of Johnny Test, Detentionaire and Fugget About It.

“TELETOON viewers expect the best in animation from us and with the shows we have in development, we continue to deliver first-class original programming.” said Alan Gregg, Director, Original Content, TELETOON Canada Inc. “We’re thrilled to be working with our production partners on these titles that fit perfectly with our kid, co-view and adult lineups.”

TELETOON Canada Inc., a major supporter of the Canadian animation and kids television industries, has invested more than $265 million in the creation, development and production of Canadian content since its inception in 1997. As part of its commitment to the industry, TELETOON is proud to be sponsoring the Kids and Animation Program at the Banff World Media Festival for the third consecutive year.

DR. DIMENSIONPANTS
Cookie Jar Entertainment  *  26 x 22 minutes
Scheduled for Winter 2014 on TELETOON
Mild-mannered 10-year-old Kyle Lipton was just a regular kid…until an inter-dimensional portal opened up and dropped a pair of Cosmic Power Pants onto his lap. Now Kyle is Dr. Dimensionpants, a superhero with a super intense attitude who, with the guidance of a talking unicorn named Philip, must deal with the constant threat of inter-dimensional villains bent on destroying his hometown. 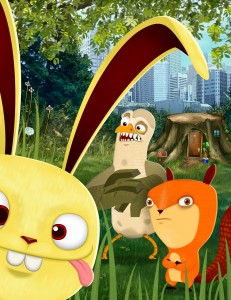 ENDANGERED SPECIES
Nerd Corps Entertainment  *  26 x 11 minutes
Scheduled for Fall 2014 on TELETOON
What happens when a cantankerous squirrel, an overly optimistic bunny and a neurotic seagull live together in a tree stump? A whole lot of nuttiness, that’s what. Merl the Squirrel, Sunny Bunny and Gull are three weirdo wild animals who turn everyday activities into total insanity.

DETENTIONAIRE (Season Three)
Nelvana Limited *  13 x 22 minutes
Scheduled for Fall 2013 on TELETOON
The first two seasons of Detentionare saw Lee Ping sentenced to a year of detention for a prank he didn’t commit. With this new season comes a new – far more epic – prank and Lee is getting blamed for it again. Once more, Lee and his friends will try to uncover the truth about the prank and figure out the reason for the strange behavior of many of the adults in town.

Fugget About It (Season Two)
9 Story Entertainment *  13 x 22 minutes
Scheduled for Fall 2013 on TELETOON at Night
Jimmy Falcone was once a feared capo in the Gambini crime family, but when his associates insisted he whack his good old Uncle Cheech, Jimmy had to draw the line. When Jimmy pleads for Cheech’s life to Don Gambini, their meeting ends with Jimmy hurling the crime boss out of a nineteen storey window. With the mob out to kill him, Jimmy has no choice but to turn to the dark side and become a witness for the Feds. Jimmy and his family are sent into witness protection in cold, snowy Regina, where it’s hard for a quick-tempered goodfella to live as a regular schnook among naïve, kind and friendly Canadians. Fugget About It is an animated comedy that was originally developed for the TELETOON At Night Pilot Project in 2007.
About TELETOON Canada Inc.
Available in both English and French, TELETOON Canada Inc. brings kids, youth and adults the best in animated and animation-related entertainment with five nationwide specialty television channels – TELETOON, TÉLÉTOON, TELETOON Retro, TÉLÉTOON Rétro and Cartoon Network (Canada). Select programming is available through On Demand, Mobile TV, iTunes and teletoon.com. Through its English and French networks, TELETOON reaches more than 7.5 million Canadian homes and TELETOON Retro is in more than 8 million homes. Founded in 1997, TELETOON is a proud supporter of the Canadian animation industry, investing over $265 million in homegrown content to date. TELETOON Canada Inc. is owned by Astral (50{f2e86ea6af82e2bb048871abf045622abf0ed27fb513932dc1ee8c05a54cbefd}) and Corus Entertainment (50{f2e86ea6af82e2bb048871abf045622abf0ed27fb513932dc1ee8c05a54cbefd}). For more information, please visit www.teletoon.com. TELETOON: It’s Unreal!