John K is Kickstarting a cartoon 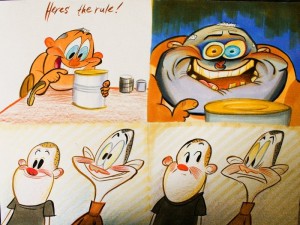 In case you haven’t heard, John Kricfalusi is trying out Kickstarter for his next cartoon,”Cans Without Labels”.  From his blog:

Hey fans and fellow animators. I know you’ve always wanted to be your own TV executives. Now’s your chance to “Green Light” a cartoon personally – without having to wait years for the mystifying network process to water down all the things you demand in your cartoon entertainment!
I have been wanting to try out this Kickstarter thing for awhile now and finally bit the bullet. I think it’s the greatest idea ever (Kickstarter that is). If it works maybe we can create a totally new and streamlined way to bring entertaining to the audience without going through all the middlemen and bureaucracy of giant corporate monopolies.
This is our chance to help bring on the future. The fans can now be the actual producers!
So whattaya say?