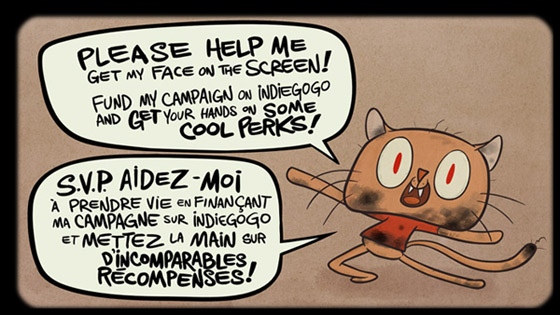 Our pals at Cartoon Brew have an admirable policy about not posting links to online funding campaigns.  They keep it very black and white, as I’m sure they need to.  We at Canadian Animation Resources, however, have no such policy.

We don’t post every campaign we come across, and I wish I could tell you there’s some kind of scientific formula for it, a strict list of criteria that a campaign must meet to get a spot on the site, but that would be total crap.  Some campaigns don’t get coverage because I think they’re crap.  Some don’t get a bump simply because I’m having a busy week.  Some I get really excited about and post right away.  I am an imperfect creature, subject to whim and fanciful distraction.

All that being said, here’s a campaign that gets me excited and almost fell prey to a couple of very busy work weeks.

Benj Arcand‘s Wackatdooo looks like a ton of fun.  He’s already raised his cash, but if you’re feeling generous, throw a few more bucks on top of the pile.  Most people are too bashful to ask for enough money in these things anyway, so I’m sure he wouldn’t be upset to find a few extra bucks in the tin.

This is exactly the kind of cartoon I want to see more of.  Here’s the IndieGogo link.