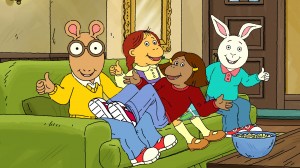 9 Story became producer and distributor of the popular series in a co-venture with WGBH Boston and PBS commencing season 16.  The series is now in HD and has been digitally refreshed. ARTHUR is the only kids’ show that shares screen time on four public broadcasters around the world: PBS KIDS GO! (US), CBBC (UK), ABC (Australia) and, commencing with the 16th season, on CBC (Canada).

“We took great care to preserve the tradition of this beloved series, while digitally updating its animation, and couldn’t be happier with its refreshed look and feel.  We are delighted ARTHUR will once again be seen on these leading international children’s channels,” said Vince Commisso, President and CEO, 9 Story Entertainment.

Based on the best-selling books by Marc Brown, ARTHUR revolves around the adventures of an eight-year-old aardvark and his family and friends. The series has aired in 83 countries and is considered a phenomenon holding the title for one of the longest-running children’s animated series in the U.S. It is the winner of four Emmy(r) awards for outstanding Children’s Animation Program, a BAFTA award, as well as a Peabody Award.

9 Story Entertainment is a leading creator, producer and distributor of award-winning animated and live action content for young audiences around the world.  With an extensive animation studio in Toronto, 9 Story has over 200 creative and production staff, and has produced more than 600 half hours of quality children’s and family programming, seen on some of the most respected children’s channels and platforms around the world.  The company’s distribution arm, 9 Story Enterprises, offers a rapidly growing catalogue which includes several beloved brands such as Wibbly Pig, Harriet the Spy: Blog Wars, Wild Kratts, Almost Naked Animals, and new seasons of Arthur. Their much anticipated new shows include Daniel Tiger’s Neighbourhood, Camp Lakebottom and the primetime animated comedy Fugget About It.  www.9story.com