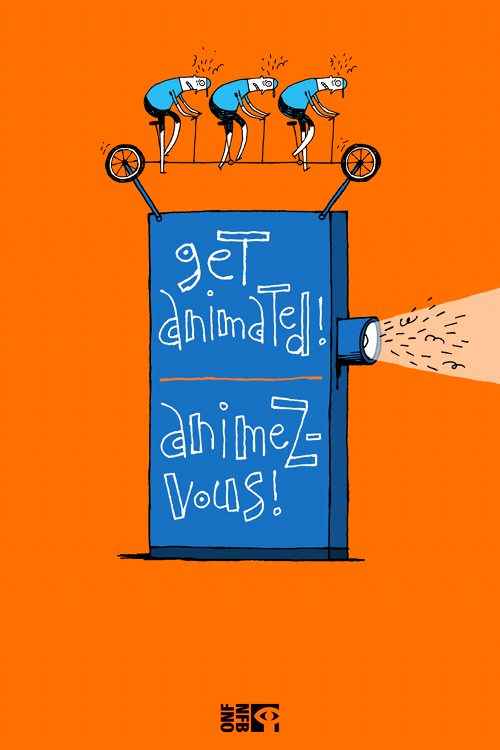 The National Film Board of Canada (NFB) is launching the sixth edition of Get Animated!, bringing many of the country’s finest and funniest animated films to communities across Canada in celebration of International Animation Day (October 28).

Taking place this year from October 26 to November 10, Get Animated! will bring the magic of animation to over 30 centres, in every province and territory, with screening programs for audiences of all ages, workshops and more. And it’s all absolutely free.

Get Animated! is presented by the NFB in collaboration with local partners across Canada. For a complete and up-to-date schedule of screenings, visit nfb.ca/get-animated.

The New Releases program features a dazzling selection of the NFB’s most acclaimed international co-productions, created by many of the world’s top animation directors.

Get Animated! also offers kid-friendly animation fun for all.

The “Not So Scary Stories” program of animated films features Lynn Smith’s The Sound Collector, the quirky tale of a six-year-old who collects sounds, along with Antoine Lanciaux and Pierre-Luc Granjon’s colourful and charming fairy tale Bonifacio in Summertime—perfect films for children ages five and up.

“Friends and Monsters” is ideal for the 10+ crowd, with Catherine Arcand’s Nightmare at School, a humorous look at the unsettling experience of being in a new school, Claude Grosch and Luc Otter’s Rose & Violet, about a very unusual set of twins, and Paula Gillgannon’s vignette The Big Swing, from the NFB’s renowned Hothouse program for young animators.

Hands-on workshops will accompany the Family Program in a number of Canadian cities, giving participants the thrill of being part of an animation film crew while making their own short film.

Workshops in Toronto and Montreal on October 27 will feature puppet animation, with participants invited to bring costumes and story ideas. To register for the Toronto workshop, or for more information, call 1-800-267-7710; for the Montreal workshop, call 514-283-9000. Both workshops include a half-hour program of animated short films. Workshops are offered in English or French, based on demand. Pre-registration is required for the workshop; screenings are open to everyone.

For complete info on these and other Get Animated! workshops, visit nfb.ca/get-animated.

Get Animated! will include free events for animation filmmakers and students?however, these industry events are open to the public, too.

Highlights will include a presentation about the NFB’s Hothouse program by producer Michael Fukushima and industry panels led by Animation Studio executive producer Roddy McManus.

Canada’s public producer and distributor, the National Film Board of Canada creates interactive works, auteur animation and social-issue documentaries that provide the world with a unique Canadian perspective. The NFB has led the way in animation for more than 70 years, since cinema pioneer Norman McLaren founded its first animation unit. Today, the NFB produces ground-breaking animated works at its studios and centres across Canada, as well as via international co-productions with many of the world’s leading auteur animators. Its award-winning content can be enjoyed at NFB.ca and on apps for smartphones, tablets and connected TV.