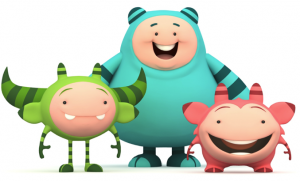 Yub Yubs, created by Matt Fernandes of Industrial Brothers, stars three curious and playful characters whose feelings are expressed by changing into other physical forms. When the Yub Yubs play together, magic happens. This silly and heartwarming CG animated series explores sibling dynamics and focuses on the communication of feelings.

“These fun series from Radical Sheep deliver exactly what our audience is looking for – engaging characters, storylines and an element of discovery,” said Michael Goldsmith, Director, Original Programming, Astral Kids. “Both the series and specials will focus on relationships between siblings and encourage exploration that will ignite young minds.”

For more information on Yub Yubs or Stella and Sam, contact Radical Sheep.

Radical Sheep Productions will be at Stand 02.10 at MIPCom, October 8th to October 10th.

Radical Sheep Productions
Radical Sheep Productions is committed to developing, producing and exploiting innovative, entertaining and high quality content across multiple platforms. With over 300 episodes of award-winning series and successful licensing programs to its name, including the celebrated The Big Comfy Couch and award winning Stella and Sam, Radical Sheep has been an established and acclaimed independent Canadian production company since 1992. Radical Sheep is currently in production on Yub Yubs, an animated preschool show for Disney Junior Canada.