A conversation with Michael Fukushima 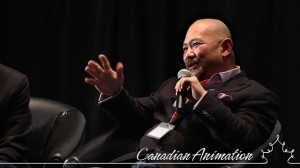 Last week felt like Michael Fukushima Week here at Canadian Animation Resources.  He was in town being honoured by the Reel Asian International Film Festival, and I had a two day period that was pretty much all him.  For those who don’t know, Michael is a producer for the National Film Board of Canada, his NFB bio reads like this:

Michael Fukushima has been making films since 1984. He joined the National Film Board in 1990, directing the Hot Docs-winning animated documentary, Minoru: memory of exile, and he became an NFB animation producer in 1997. Fukushima co-created the NFB’s flagship emerging filmmaker program, Hothouse, and his credits reflect an eclecticism and diversity, particularly around abstract and slightly off-centre animation. He has worked hard to open up the genre to new audiences and new technologies, through interactive installations, mobile phones and urban stories.

Fukushima’s notable films include the Genie Award winner, cNote, by Chris Hinton, Lillian Chan’s award-winning Jaime Lo, small and shy, two shorts from the Emmy-nominated mobile phone anthology Art of Seduction, and the abstract short HA’Aki, by Iriz Pääbo, winner of the 2009 Prix Ars Electronica Golden Nica. A recent animated documentary by Shira Avni, Tying Your Own Shoes, won both the Golden Dove at Dok Leipzig and the prestigious NHK Japan Prize. He has just completed Oscar®-nominated Japanese filmmaker Koji Yamamura’s Muybridge’s Strings, Ann Marie Fleming’s I Was a Child of Holocaust Survivors, and is currently developing a slate of “arty” short films by a bevy of interesting young Canadian creators alongside a handful of international co-productions.

Recently, Michael worked with artist and illustrator, Patrick Doyon.  The resulting film, Dimanche, is a personal favourite, and added even more awards and honours to Michael’s credit list.

I had a chance to sit down with Michael for a couple of hours, and ask him a bunch of questions, which we were fortunate enough to capture for you guys on camera, via Grayden Laing.  I have to give Grayden a huge thank you, along with everyone at the NFB and TAAFI, for making this happen.  Michael is an amazing guy, and there’s just so much great stuff in his head.  We shot about 75 minutes worth of footage, and every bit of what Michael had to share was golden.  We talked about his early days, what got him to the NFB and making the move from director to producer.  The National Film Board is an interesting entity in our community, it’s got it’s own mythology, which can be pretty daunting to an outsider.  Michael dispels a lot of that, while acknowledging it at the same time.  He’s approachable, he’s warm, and he’s smart.

I’m told part two is coming on the 22nd of November, so we’ll start with this.

I hope you enjoy watching it a fraction as much as I enjoyed being a part of it, and please excuse my various coughs, “umms” and constant interjections.  I did my best to contain myself.