Showcase: Monkey and the Rabbit, by Rodney G King 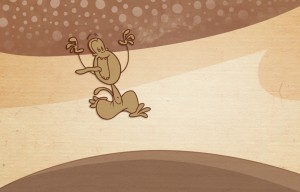 As we approach the weekend, I thought I’d give you something to stick in your eyeholes.  It’s Monkey and the Rabbit, by Rodney G King.  I asked Rodney about himself and the short, here’s what he had to say:

I’m from New Brunswick, went to animation school out there, NBCC Miramichi. After that I got to work on a very fun, creative show called Doodlez. That was produced in PEI. I was a lead animator and ended up writing 12 episodes before leaving that job to attempt getting into music school. Turns out I wasn’t prepared enough for music school and I landed a job at Nelvana in Toronto where I have been for about 8 years. Animating on various shows they produce, like Spliced, Sidekick and currently Scaredy Squirrel.

As far as making a film, it was the reason I pursued animation. I was always doing little animated stories as a kid. On those yellow sticky pads, or trying stop motion stuff with the household camera. I loved all types of animation, and most artistic mediums for that matter. I sort of thought that’s what you do, go to animation school then start making films. 🙂 Well it took me till now to really have the skills necessary to put a film together on my own. And to be honest with you, it has been one of the most creatively rewarding things I’ve done. Not just working on the short but getting to see that after 10 years of work your skills really do improve, whether you want them to or not. 🙂  Also at work I only animate, with this short I got to do everything from music to designs, to animation.

I’m very happy people seem to be enjoying it, and I can’t wait to start the next one.

Oh, and it’s pretty violent.  You are warned.